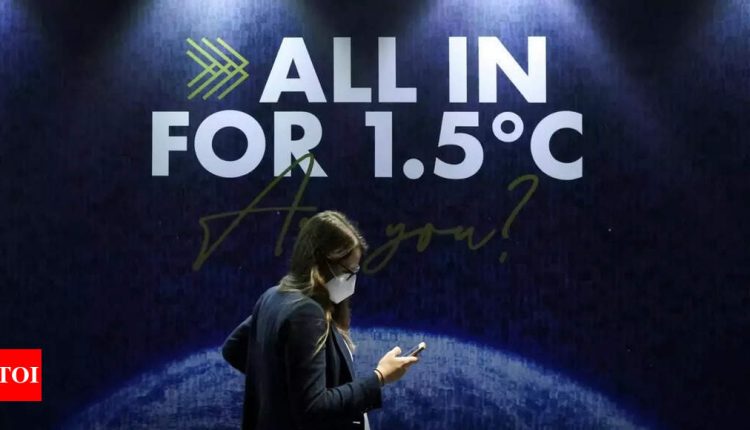 0
Share
NEW DELHI: Climate experts on Sunday came in full support of India, after it was criticised by several nations for using the term “phase down” instead of “phase out” of coal at COP26 in Glasgow, saying it should not be seen as a diversion from its commitment towards this global climate crisis.
Almost 200 nations at the UNFCCC COP26 in Glasgow accepted a compromise deal on Saturday, aimed at keeping the key global warming target alive, but it contained a last-minute change that watered down crucial language about coal.
Several countries, including small island states, said they were deeply disappointed by the change promoted by India to phase down, rather than phase out coal power, the single biggest source of greenhouse gas emissions.
While the world expressed disappointment, climate experts in India felt that the first-ever mention of phase down of coal by the country in an international climate agreement is an important indication of the energy transformation underway, and criticised the developed nations for once again failing to deliver the promised climate finance.
“The COP26 has definitely narrowed the gap for limiting global temperature to 1.5 degrees Celsius and the processes which can be taken for future action. But the failure of the US and EU to deliver on the promised USD 100 billion in climate finance remains urgent and central to any ambitious climate action.
“Blocking the establishment of even a modest fund to help vulnerable communities around the world with the massive loss and damage they are experiencing at the hands of the climate crisis is a serious blow. As with Covid, those with the least resources have been left to fend for themselves. However, the first-ever mention of coal phase down in an international climate agreement is an important indication of the energy transformation underway and a clear signal to markets and industry. COP26 is real progress but much more is still to be done,” said Aarti Khosla, Director, Climate Trends.
Sharing a similar view, Kamal Narayan, CEO Integrated Health and Well Being Council (IHW), said, “With the kind of commitment and leadership India has shown in building renewable energy infrastructure and its aim to draw more of its energy requirements from such sources, the use of ‘phasing down’ coal instead of ‘phasing out’ alone shall not be seen as diversion from its commitment towards this global emergency.”
He said while activists would hardly be pleased with the COP26 outcomes and may criticise it for being too slow, the global realities and growth challenges for major populations like India too need to be considered.
Manjeev Puri, Distinguished Fellow, The Energy and Resources Institute (TERI), said, “There is nothing much. There is no real commitment on part of developed countries to move ahead with serious and urgent domestic action, let alone in terms of global collaboration and truly significant climate finance for tackling climate change.”
According to Suyash Gupta, Director General, Indian Auto LPG Coalition, it is “unfair” for the west to ignore India’s energy imperatives.
“It is unfair for the west to ignore India’s energy imperatives — home to almost a fifth of the world’s population. ‘Been there, done that’ – those being critical of India’s unambiguous and pronounced stand at COP26, cannot live in denial – after getting the world to the present situation.
“In fact, on a per capita basis, the west itself needs to do much more. Considering India’s impeccable non-proliferation record, the west must rather play the role of an enabler and expedite India’s entry into the Nuclear Supplier Group (NSG). Despite traversing well on the renewable roadmap, India just cannot wish away the energy needs of its 1.3 billion people – with two-thirds of its needs being currently met by coal,” Gupta said.
He said that unless a more conducive global ecosystem is in place to fast-track the transition, India cannot be stifling its growth and sustenance needs.
The Glasgow Climate Pact states that the use of unabated coal should be phased down, as should subsidies for fossil fuels. The wording is weaker than the initial proposals, with the final text calling for only a “phase down” and not a “phase out” of coal, due to a last-second intervention by India, and of inefficient subsidies. But this is the first time fossil fuels have been mentioned in a UN climate talks declaration.
Ulka Kelkar, Climate Programme Director, WRI India, said that India will have to join other countries to escalate emission reduction actions more frequently.
“This will not be easy for a lower-middle income country that is trying to lift millions of people out of poverty. India’s battle against climate change will be led by scaling up renewable energy, which will be the foundation of our net zero future; by industry, who will fight to stay competitive in the global economy; and by states and cities, who will need to urbanize with respect for nature.
“Now that COP26 has finalised the rules of carbon trading, India will be able to sell more than a million carbon credits from previous years, and can also create a domestic market for carbon trading,” she said.
0
Share