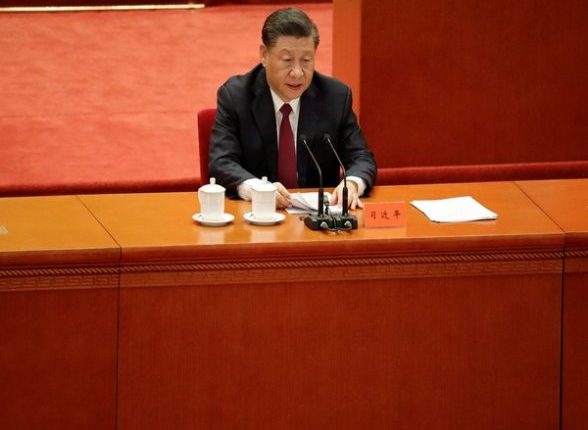 Beijing, June 23: The critics of President Xi Jinping launched a campaign titled ‘Jade Campaign/Overthrow Xi Save China Campaign’ ahead of the election as Xi seeks to extend his presidency beyond 2023. Non-mainstream Chinese news websites and some Twitters account including Cai Xia shared the campaign text on their accounts.

“On the eve of the 20th Communist Party Congress, this is the best time for we the people to save ourselves, and perhaps even the last window of opportunity for the Chinese nation. Xi’s campaign-style pandemic prevention has caused immeasurable damage across the country,” the campaign text reads. PM Narendra Modi To Virtually Attend BRICS Summit on Invitation of Chinese President Xi Jinping on June 23.

A megacity like Shanghai can be locked down at will, destroying the economy, and causing numerous humanitarian disasters and unprecedented levels of anger. Now Xi is at his lowest point; he has not grasped absolute power and he is under pressure,” the campaign added.

It further stated that people are angry with the Chinese President. “Currently, public discontent is boiling in China; people are desperate for change; everyone is disgusted with Xi, and the international community is strongly anti-Xi. Xi faces the same fate as Romania’s Ceausescu. On that day, at a meeting of the National Assembly, someone suddenly shouted, “Down with Ceausescu!” Thousands of people started to shout too, and the regime was quickly over.”

It calls upon Chinese citizens to participate in the campaign by doing the following: 1. Take selfies / short videos holding signs or pictures of jade jewellery items and share them widely; 2. Create and share creative graphics/animation/videos about Xi’s crimes against humanity; 3. Post and pass around flyers (Please be careful if you are in China); 4. Tell friends and relatives about the current situation. Discourage law enforcement and military personnel not to be accomplices of the evil regime. 5. Invite friends to join the #DownXi campaign / #JadeCampaign.

The critics of the campaign also asked people to track down the Xi family and their minions for evidence of corruption and money laundering. Liaise with all people from all walks of life to form a united force. When the time is right, come together to challenge the regime.

The timing of the campaign is interesting as it comes just before Beidiahe. Looking at various media spaces, such as Twitter, Telegram and YouTube, the campaign is yet to pick up the pace but it has produced chatter and content, for example, posts on Twitter calling to oppose Xi, and a group has been formed in Telegram with the name of the campaign in which people are sharing their anti-Xi contents such as Chinese poems, and posters that call for protests outside Chinese diplomatic missions from July 1 to July 3.

On Xi attending the 25th Anniversary of the HK handover and non-mainstream media believes that Xi will not be attending the ceremony because of three reasons: 1. Because of the disease he is rumoured to be suffering from a Cerebral Aneurysm. 2. Because there are still a considerable number of Covid cases in Hong Kong. 3. Because the power struggle is heating up now, he wouldn’t want to leave the mainland at this crucial time.

The Communist Party of China Central Committee had proposed to remove the expression that the President and Vice-President of the People’s Republic of China ‘shall serve no more than two consecutive terms’ from the country’s Constitution.

However, there are signs such as primary school looking for pupils to spend a week in hotel quarantine ahead of next month’s handover anniversary. Perhaps Xi would want to attend this event because not attending will also send an unfavourable signal to his opposition and fuel more speculations.

Nothing Phone (1) Will Not Be Launched in the US or Canada: Report

Rupee vs Dollar: Indian Rupee Settles at All-Time Low of 78.32 Against US Dollar