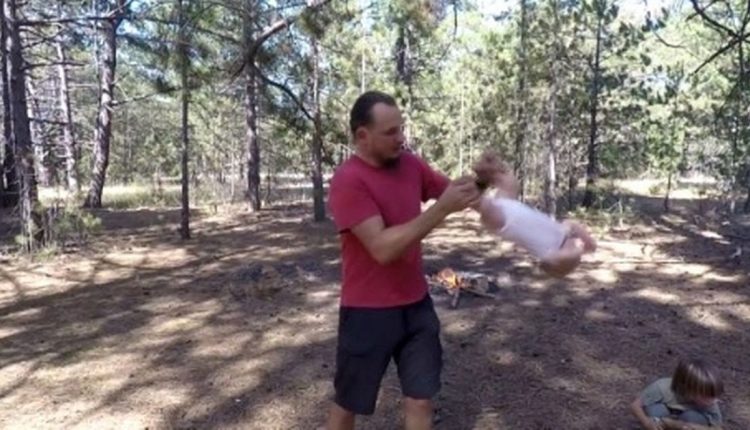 Kirill Stremousov, who was previously filmed throwing his infant daughter around by her limbs “to make her strong”, has been appointed one of the governors of occupied Kherson

Vladimir Putin has appointed a vile thug who was filmed swinging his infant daughter around his head in a sickening video as his new ‘puppet governor’ of a Ukrainian city.

Kherson was the first major city in the country to fall to the Russian invaders earlier in the war and has seen relatively little violence since.

Pro-Putin collaborators, led by cruel Kirill Stremousov who was filmed on YouTube throwing his daughter around by her limbs in 2017, have now called for the region to officially become part of Russia.

Stremousov is now deputy head of the Kherson regional administration.

It is unclear why warmonger Putin has chosen the despicable YouTuber as his voice for the region.

Experts believe the administration has denied people the vote in a referendum as they realise they would lose heavily.

The Kremlin is believed to be considering plans to annex the area as it did Ukraine ’s Crimean peninsula, which borders the Kherson region, in 2014 in a move denounced as illegal and rejected by most of the international community.

Putin appointed the YouTuber in Kherson
(

Kremlin spokesman Dmitry Peskov added: “[It is] up to the residents of the Kherson region after all to decide whether such an appeal should be made or not.”

Stremousov was filmed swinging his daughter around his head in a forest in 2017.

He sickeningly told the camera he could hear her “bones popping” and it was like when “astronauts do their training”.

He added: “Let’s work with shoulders and her grip to make them stronger.

The sickening clip saw him swing a baby round his head
(

“Her blood [is] running faster now. The girl feels good, she is smiling.”

In the YouTube video Stremousov said he was demonstrating his baby was “at one with nature” and was born at home “in a natural way”.

He said he was showing off “gymnastics from ancient times”.

He added that his daughter has never been vaccinated or “taken pills” but instead “lives in harmony with nature.”

The baby girl was his daughter
(

Last month the Russian rulers of Kherson announced it was to introduce its rouble currency on the captured Ukraine region from the start of May.

In April occupying thugs aimed tear gas and stun grenades on a “peaceful pro-Ukrainian rally on Freedom Square in the city of Kherson.”

Ukrainian President Volodymyr Zelenskiy praised the protests at the time, saying in a late night address: “I am grateful to everyone who has not given up, who is protesting, who is ignoring the occupiers and showing the marginal people who have become collaborators that there is no future for them.”

Thousands of people have fled Kherson to Ukraine-controlled territory, according to the local authorities, amid reports of power and water outages, severe shortages of food and medicines and cellphone network issues in some occupied areas.