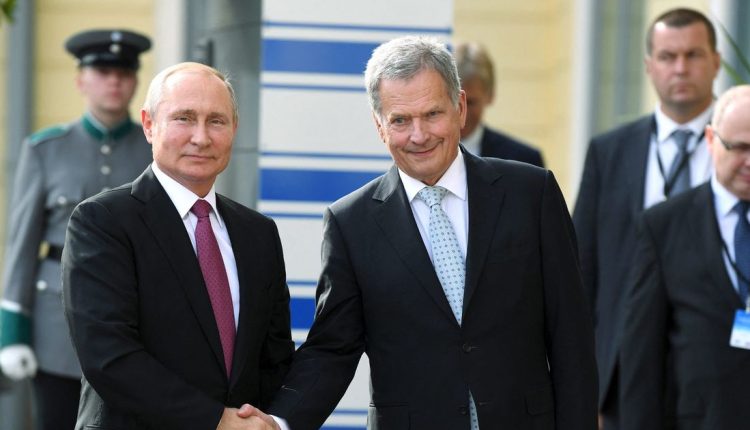 Russian President Vladimir Putin has warned Finland that joining NATO is a mistake.

Finnish counterpart Sauli Niinisto was told ditching neutrality would be a mistake that could damage relations between their two countries, according to the Kremlin.

The two countries said their presidents spoke by phone two days after Finland declared its intention to join the Western alliance.

Moscow has described that as a security threat that will require it to respond, but has not specified how.

Niinisto’s office told Putin: “Russian demands in late 2021 aimed at preventing countries from joining NATO and Russia’s massive invasion of Ukraine in February 2022 have altered the security environment of Finland”.

He said Finland wanted to handle relations with its nearby Russian neighbour in a “correct and professional manner”.

The Kremlin said: ” Vladimir Putin stressed that abandoning the traditional policy of military neutrality would be a mistake, since there are no threats to Finland’s security.

“Such a change in the country’s foreign policy may have a negative impact on Russian-Finnish relations.”

Local defence exercise in Taipalsaari near Lappeenranta and close to the border with Russia, south-eastern Finland
(

Moscow described the call as a “frank exchange of views” – normally a diplomatic euphemism for a difficult conversation.

Niinisto said: “The conversation was direct and straightforward and it was conducted without aggravations.

Finland’s membership bid is expected to be followed by a similar move from Sweden.

This would confront Putin with exactly what he said he wanted to avoid when he launched the invasion of Ukraine: a further expansion of NATO to Russia’s borders.

Earlier today The Mirror reported how Alexander Grushko said Moscow has no hostile intentions towards Finland and Sweden who have moved to join the western alliance.

But he said he doesn’t see “real” reasons for the two countries to make such a decision.

“It will be necessary to respond ..by taking adequate precautionary measures that would ensure the viability of deterrence,” Interfax agency quoted Grushko as saying.

Kremlin forces invaded Ukraine in February because the Russian President wanted to push the Western military alliance back from his country’s borders.

He has demanded the former-Soviet allies never be allowed to become a member of the alliance.

But the war has instead led to its neighbour Finland, with which it shares an 810-mile border, saying it wants the protection of the 30-member, nuclear-armed coalition.

“We hope that the national steps still needed to make this decision will be taken rapidly within the next few days.”

NATO Secretary-General Jens Stoltenberg previously said it would be possible to allow Finland and Sweden to join “quite quickly”.

Kremlin spokesman Dmitry Peskov said the steps taken by Finland to join NATO were a cause for regret and a reason to impose a symmetrical response.

Teacher’s Pet murder trial – the teacher, his wife & the schoolgirl he moved in
0
Share