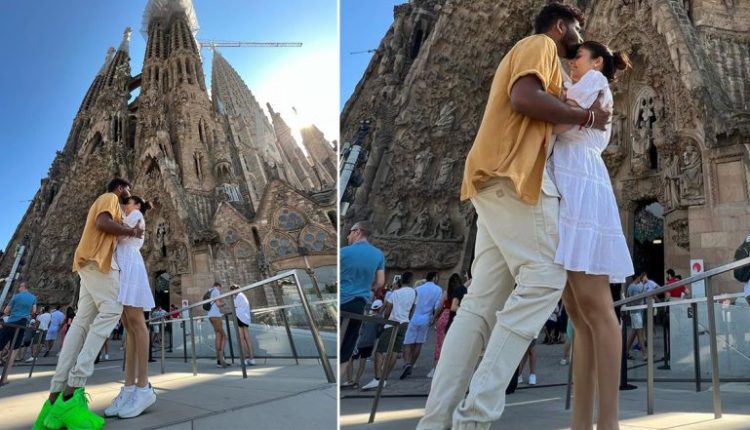 South director Vignesh Shivan, on Tuesday, dropped some adorable pictures with his wife Nayanthara from their trip to Spain. Taking to Instagram, the Tamil director shared a string of pictures, which he captioned, “No Pain … No Spain #WorkHard #Travel and again get ready to #WorkHard to travel again. This vacay feels much needed after soooo much of continuous work amidst the pandemic! It feels sooo different to be out in another country after a long time !! And it’s refreshing and rejuvenating maxxxxxx !!! Saving a good sum of my money only for travelling, eating and listening to music around the globe!” Nayanthara Gets a Kiss From Hubby Vignesh Shivan During Their Holiday in Spain (View Pic).

In the first picture, Vignesh could be seen posing in a white t-shirt and blue jeans. In another picture, he struck a romantic pose with his wife south actor Nayanthara on the streets of Barcelona, as he could be seen holding the ‘Bigil’ actor close to him. In another cute romantic picture, the couple could be seen holding hands and looking deep into each other’s eyes. In the last picture, the newly-wed couple can be seen posing under the bright dummy stars, while holding their hands up in the air. Soon after Vignesh dropped these adorable pictures, fans flooded the comment section with red heart emoticons. Nayanthara and Vignesh Shivan Get Mushy As They Jet Off to Spain for a Mini-Vacation (View Pics).

“Aww….nayan mam u look so so pretty,” a fan commented. Another fan wrote, “You two are sucha goals.” Nayanthara and filmmaker Vignesh Shivan married in Chennai on June 9. It was an intimate wedding with only their close friends and select guests, including Shah Rukh Khan, AR Rahman, Suriya and Rajinikanth, in attendance. Meanwhile, on the work front, the 37-year-old Kollywood actor was last seen in ‘Kaathuvaakula Rendu Kaadhal’ on the big screen, which gathered a decent response from the netizens, and in ‘O2’, a survival drama film, which premiered on Disney+ Hotstar.

She will be next seen in ‘GodFather’ alongside south actor Mohan Lal. The film is slated to release on the occasion of Dussehra 2022 and in director Atlee’s next action thriller film ‘Jawaan’ with Shah Rukh Khan, which is all set to hit the theatres on June 2, 2023.