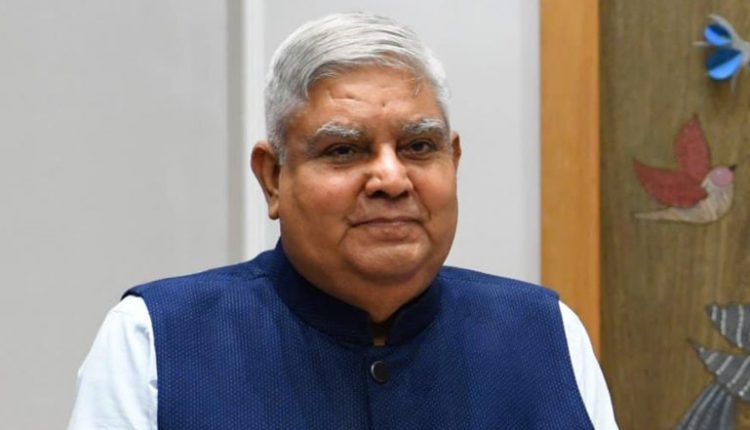 Mumbai, August 6: Jagdeep Dhankhar, former governor of West Bengal, will be the new Vice-President of India. He will succeed M. Venkaiah Naidu, whose five-year tenure comes to an end on August 10.

The vice president of India, the second-highest constitutional post in the country, is elected through a secret ballot by an electoral college comprising all members of the Rajya Sabha and the Lok Sabha, including its nominated members.

Dhankhar did his primary schooling from his village Kithana. He later joined the Sainik School, Chittorgarh, on full scholarship. After gruduating from Sainik School, he joined the Maharaja’s College, Jaipur in the B.Sc (Honours) Physics course.

After finishing his graduation in Physics, he pursued a degree in Law from the University of Rajasthan. Despite being a first-generation professional, he became one of the leading lawyers in the state. Dhankhar has practiced in both the Rajasthan High Court and the Supreme Court of India.

He also served as the Minister of State for Parliamentary Affairs in 1990. In 1993, he was elected to the Rajasthan assembly from the Kishangarh constituency in Ajmer district.

Dhankhar joined the Congress when PV Narsimha Rao became the prime minister and Devi Lal was no more that effective. But with the rise of Ashok Gehlot in Rajasthan politics, he shifted to the BJP and is said to have become close to Vasundhara Raje soon after.

(The above story first appeared on Today News 24 on Aug 06, 2022 08:36 PM IST. For more news and updates on politics, world, sports, entertainment and lifestyle, log on to our website todaynews24.top).