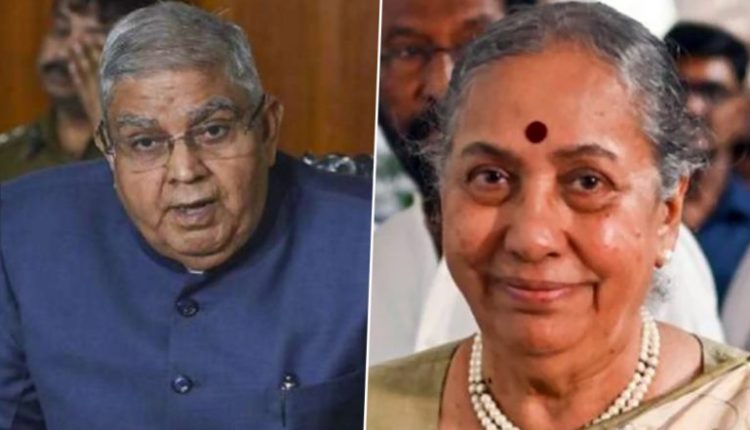 The election for India’s new Vice-President will be held today, August 6 and the results for the second-highest constitutional position in the country is likely to be delivered by evening. This year, it will be a tough fight between NDA candidate Jagdeep Dhankhar and Opposition candidate Margaret Alva.

As per the current situation, the BJP alone has enough votes to ensure that Dhankhar crosses the majority mark. As per the electoral college arithmetic, Dhankhar has two-thirds of votes in his favour as the BJP by itself has 303 members in the Lok Sabha and 91 in the Rajya Sabha.

Dhankhar, who has practiced in both Rajasthan High Court and the Supreme Court of India, has served as an MP and Minister of State for Parliamentary Affairs in 1990. Vice Presidential Election 2022: Telangana Rashtra Samithi Announces Support for Opposition Candidate Margaret Alva

Margaret Alva, who entered politics over 5 decades ago in 1969 by joining the Indian National Congress, too has a Rajasthan connection. She was the Rajasthan Governor from May 2012 to August 2014. She had also been the Governor of Uttarakhand, Goa and Gujarat. Vice Presidential Elections 2022: TMC To Abstain From Vice Presidential Election, Says Party Leader Abhishek Banerjee

To be eligible to become a Vice-President, an individual needs to be above 35 years of age. They also need to be a citizen of India and meet all the requirements to become a member of the Rajya Sabha.

In case an individual holds any office of profit with the Government of India, or any state government, they are no longer eligible to become a Vice-President.

(The above story first appeared on Today News 24 on Aug 06, 2022 08:00 AM IST. For more news and updates on politics, world, sports, entertainment and lifestyle, log on to our website todaynews24.top).