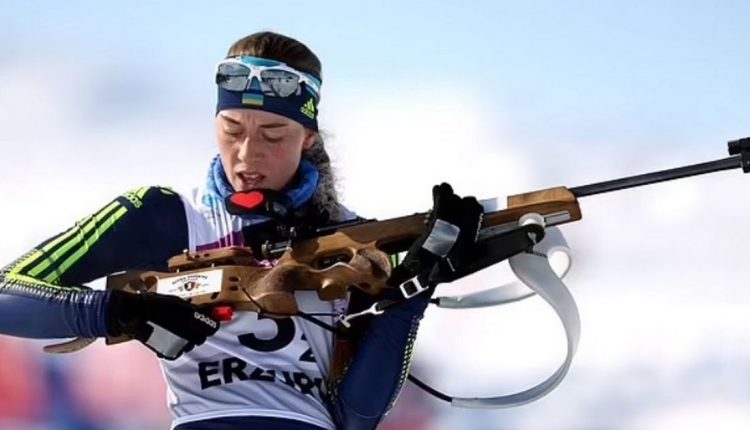 A Ukrainian gold medal shooter has warned Putin’s forces that they won’t have a chance.

Kristina Dmitrenko now wants to change her focus and is eyeing a new target after joining forces in the frontline and using her shooting skills against Russia.

She has already won an Olympic gold and does not fear the invaders who have wrecked parts of her country.

The champion shooter took the gold medal in the 2016 Youth Olympic Games biathlon which awards competitors for their cross-country skiing and rifle shooting.

She is from the northern Ukrainian city of Chernihiv and was poised to enter an international competition in Italy when war broke out in Ukraine this year.

She said: “I never thought in my life it would be like this. No one can imagine this.

“I shoot well, so the invaders won’t have a chance.

“Even if I temporarily replace my biathlon rifle with a machine gun, whatever weapon is in my hands, I will stand to the end. Victory will surely be ours.”

Before the invasion, she went to training camp in the Carpathian Mountains with other competitors from her junior national team.

However, she woke up to a message from a friend on February 24 saying Ukraine had had been invaded.

She added: “Friends from Chernihiv and Kyiv sent pictures of the horror they had to endure Miss

“But I have no fear of the enemy.”

Last month The Mirror told how a female sniper had been dubbed Ukraine’s new ‘Lady Death’ after vowing to defeat the Russians in the ongoing war.

Known only by the codename Charcoal, the decorated but masked woman returned to the frontline 35th infantry brigade of Rear Admiral Mykhailo Ostrogradsky with a pledge to “take them all out”.

The newsletter is emailed out first thing every morning, at 12noon and every evening.

Never miss a moment by signing up to our newsletter here.

This echoes Lyudmila Pavlichenko, a legendary Ukrainian sniper who manage to kill 309 Nazis during World War II and was given her country’s highest award, the Hero of the Soviet Union.

Known as ‘Lady Death of the Red Army’, she’s recognised as the most successful female sniper of all time, appearing on postage stamps and meeting the three Allied leaders Winston Churchill, Franklin D. Roosevelt and Joseph Stalin.

Now, Charcoal – whose face remains partly covered to protect her identity – has followed in Pavlichenko’s footsteps with her defiant stance.