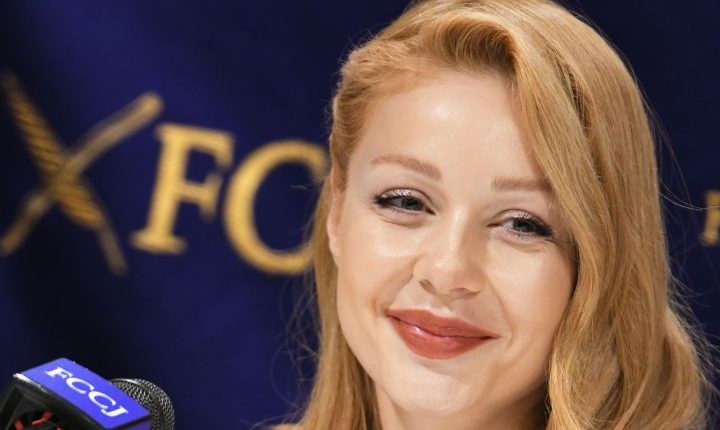 By The Associated Press.

Singer Tina Karol said Monday from Japan that she and her fellow Ukrainians will not give up defending their land and culture from Russian invasion and are determined to win the war and rebuild an even more beautiful country.

“My weapon is language and music,” Karol said in Tokyo as she concluded a weeklong visit to rally support for Ukraine. “My words are strong and my music moves emotions.”

“The biggest tragedy today is the deaths of children. The children had to close their short lives … for those children, a lullaby is not going to be sung,” she said and sang a passage of a Ukrainian song during the news conference.

Karol came to Japan at the invitation of Rakuten Group founder and CEO Hiroshi Mikitani, who first met her during his 2019 business trip to Ukraine.

Japan has provided humanitarian and financial support for Ukraine and has so far accepted about 800 evacuees from that country — a rare move for Japan given its extremely strict immigration policy.

Mikitani, who made a personal contribution of 1 billion yen ($7.7 million) for the Ukrainian government in February, said he hoped Japan’s acceptance of Ukrainian war evacuees will “be a small but a big first step for Japan” to be more open to international society.

Japan quickly joined the United States and Europe in imposing sanctions against Russian invasion of Ukraine because of concern Moscow’s actions may embolden China’s already assertive actions in the region.


READ MORE:
Billie Eilish Dedicates Performance Of ‘Your Power’ To People Of Ukraine

Separately, Prime Minister Fumio Kishida met with Karol and pledged Japan’s further support for Ukraine. “We will continue our effort with the people of Ukraine, as we are determined not to allow use of force to one-sidedly change the status quo, and think of the problem as our own.”

Karol told Kishida that Ukraine was attacked for choosing freedom and that it is fighting for global peace, while Russia is destroying peaceful towns of her country.

While in Japan, she also performed at a charity fashion and music event and visited the city of Hiroshima on Sunday.

She paid tribute to the victims of the Aug. 6, 1945, atomic bombing of the city and saw “a great calamity” at its peace museum and felt strongly that nobody should face the threat of nuclear weapons again.

She also said she was inspired by the people’s resilience and effort to rebuild from the ruins of the atomic attack.

“We will win and we will rebuild our country,” Karol said. “You will see a glorious country in the center of Europe.”