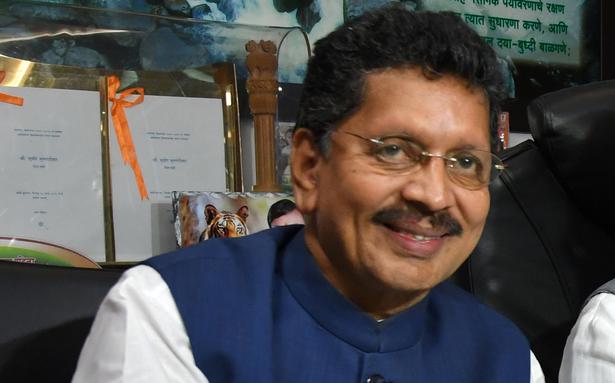 Deepak Kesarkar says Mr. Thackeray was planning to resign as CM in 2021.

Deepak Kesarkar says Mr. Thackeray was planning to resign as CM in 2021.

Claiming that Shiv Sena leader Aaditya Thackeray was ‘defamed’ by Union Minister and senior Bharatiya Janata party (BJP) leader Narayan Rane after the death of Sushant Singh Rajput, MLA Deepak Kesarkar, the spokesperson of the Eknath Shinde-led Sena faction, on Friday revealed that after Prime Minister Narendra Modi played a hand in halting this ‘defamation’, Uddhav Thackeray was reportedly ready to resign as Maharashtra Chief Minister and was well-disposed towards a re-alliance with the BJP.

Speaking to reporters in Mumbai, Mr. Kesarkar, the legislator from Sawantwadi in the Konkan, further claimed that despite a positive dialogue between Mr. Thackeray and the PM last year, the subsequent events led to a change.

“At the time of [Bollywood actor] Sushant Singh Rajput’s death, the press conferences taken by Mr. Rane had, in large part, contributed to Aaditya Thackeray’s defamation. As the Thackeray family was hurt at the time, so were we [rebel MLAs now with Mr. Shinde]…At the time, I had asked a number of BJP leaders with whom I was in contact as to how the party could allow Mr. Rane to defame Aaditya. They, too, said most of their [BJP] MLAs were against this,” said Mr. Kesarkar, adding that Sena MLAs were upset that such a thing should befall a young person with a bright political future as Mr. Thackeray.

According to Mr. Kesarkar, he took it upon himself to open a channel with the PM, who responded positively and apparently halted any further ‘defamation’ of the younger Mr. Thackeray.

“We got a good response from PM Modi. He spoke with Uddhav Thackeray. The latter met him in Delhi [in June last year]…though this all, I sensed how much affection the PM has for Balasaheb Thackeray and the Thackeray family,” said the Shinde camp spokesperson.

Mr. Kesarkar claimed that the result of this interaction was that Mr. Thackeray had apparently made up his mind to resign as CM of the tripartite MVA and re-ally with his estranged saffron partner – the BJP.

“After his meeting with the PM in Delhi, the sense that I got was that Mr. Thackeray was planning to resign within the next 15 days. But he wanted to speak with his party workers before his step. Unfortunately, in that time, 12 BJP MLAs were suspended by the MVA from the Assembly. Then Narayan Rane was inducted by the BJP in the Central cabinet and the dialogue [between Uddhav Thackeray and the PM] stopped,” he said.

Mr. Kesarkar said that after Mr. Shinde broke away with the majority of the Sena MLAs, Mr. Thackeray was willing to consider an alliance on the BJP on condition that Mr. Shinde be sidelined – something neither the BJP leadership nor the ‘rebel camp’ MLAs were willing to countenance.

Mr. Kesarkar’s ‘soft’ comments towards Aaditya Thackeray come at a time when the Yuva Sena leader is touring Maharashtra and taking a hard-line against the rebel MLAs, dubbing them ‘traitors’ whom the Thackeray family had showered with more affection than they deserved.

With Uddhav Thackeray unable to lead the charge against the rebels following Mr. Shinde’s coup, it is Aaditya who has been aggressively hitting the streets in a bid to retain the Thackeray clan’s hold over the Sena rank-and-file even as the two factions are embroiled in a legal tussle over control of the party.

Stating that while the MLAs in the Shinde camp still regarded Mr. Uddhav Thackeray and Aaditya Thackeray with great respect, Mr. Kesarkar urged the Thackeray camp to stop instigating the party cadre against the Shinde camp.

“What they [Uddhav camp] keep saying, that the BJP is trying to finish off the Shiv Sena, is completely false given that Mr. Thackeray himself wanted an alliance again with the BJP,” he said.

Stressing that the Shiv Sena must remain united as it is a question of pride of the Marathi-speaking people, Mr. Kesarkar said the need of the hour was to keep alive Bal Thackeray’s ideals.

“So, when we have decided to join hands with the BJP keeping Hindutva in mind, you [Uddhav Thackeray] cannot rouse party workers against us,” he said.