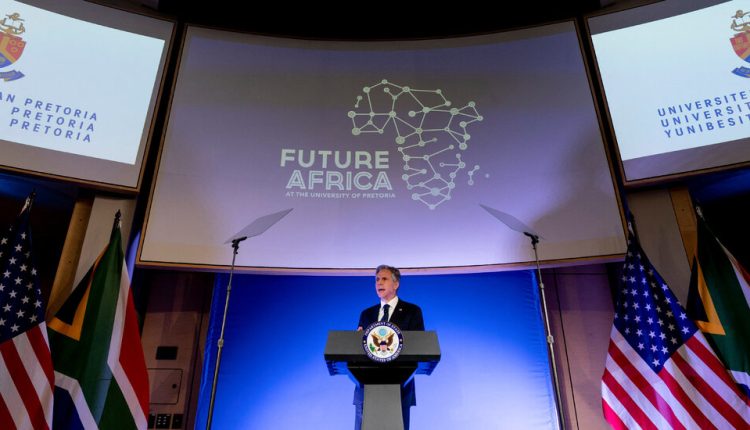 PRETORIA, South Africa — The United States has been grappling with the growing influence of China, Russia and Middle Eastern nations across Africa, a situation made more acute in recent months by the competition to win partners in the war in Ukraine.

On Monday, Secretary of State Antony J. Blinken unveiled the Biden administration’s main approach to addressing that challenge and other strategic goals in Africa: promoting democratic governance across the continent.

“History shows that strong democracies tend to be more stable and less prone to conflict — and that the poor governance, exclusion and corruption inherent in weak democracies makes them more vulnerable to extremist movements and foreign interference,” Mr. Blinken said in a speech at the University of Pretoria, on the first stop of a tour of Africa that will also take him to the Democratic Republic of Congo and Rwanda.

It is unclear how his message will be received at a time when some African countries are turning away from democracy and settling into authoritarian rule — sometimes by military officers who carried out coups. The United States could risk alienating some African leaders who prefer the authoritarian model or those who see Washington’s governance push as imperial power projection.

“If your tactic is to approach African countries and say, ‘Listen, you must be democratic and use our model, it works,’ I think it’s bound to lead to some failure,” said Naledi Pandor, the foreign minister of South Africa, who met with Mr. Blinken on Monday.

“I do agree with Tony that all countries and peoples deserve the right to exercise their civil and political rights,” she added. “But I think given history, the approach has to be somewhat different, and I would recommend a greater attention to tools that Africans have developed.”

China, which Mr. Blinken says is the greatest challenger to American power, has established an enormous presence in Africa, with state-owned enterprises building infrastructure across the continent, the Chinese military bolstering a base in Djibouti and the Communist Party opening a pan-Africa leadership school in Tanzania. But there has been a backlash among some Africans to labor and loan practices by Chinese companies.

Read More on the Relations Between Asia and the U.S.

Middle Eastern nations are also playing a growing role across Africa: Qatar, the United Arab Emirates and Saudi Arabia are influential in the Horn of Africa, and Turkey has its biggest embassy in the world in Somalia, where it also runs the main port and airport.

Mr. Blinken insisted at a news conference before his speech that the administration’s Africa strategy was not centered on rivalry with China and Russia. But a White House document released the same day said the effort to strengthen “open societies” was partly intended to “counter harmful activities” by China, Russia and “other foreign actors.”

He also said pandemic recovery, health security, climate adaptation and environmental conservation were pillars of the Africa strategy — consistent with what President Biden has named as his global priorities.

The Biden administration has made democracy promotion a focus of its foreign policy, a throwback to Democratic and Republican administrations before that of President Donald J. Trump, who shunned the goal.

However, contrary to the post-September-11 approach to democracy-building, which took place under a heavy American military presence in Iraq and Afghanistan, the Biden administration seeks to de-emphasize the use of hard power in Africa.

Mr. Blinken said the administration would carry out governance stability programs with local partners “in places where conditions are ripe for conflict” — projects enabled by the Global Fragility Act of 2019 that gives $200 million annually in Congressional-approved funds for a decade.

The strategy document says the United States aims to “stem the recent tide of authoritarianism and military takeovers” in part “through a targeted mix of positive inducements and punitive measures such as sanctions.”

Bob Wekesa, deputy director of the African Center for the Study of the United States at the University of the Witwatersrand in Johannesburg, said, “The new strategy is to move away from that preaching and proselytizing approach of the past, but at the same time, it doesn’t go very far away from it.”

Mr. Blinken and the National Security Council chose to announce the new strategy in South Africa because it is the continent’s largest democracy and an important U.S. trade partner.

But American diplomacy here has run into obstacles. U.S. officials have had difficulty persuading South African counterparts to abandon a neutral position on the Ukraine war. South Africa was among 17 African nations that abstained from voting in March on a U.N. General Assembly resolution condemning Russia, in contrast to 28 African countries that approved the resolution.

Mr. Blinken sought to highlight Russia’s brutality on Monday, asserting the economic devastation caused by the pandemic was “deepened by Russia’s unprovoked war on Ukraine.” He cited World Bank estimates saying the invasion could add 40 million people — mostly in Africa — to the ranks of the 193 million people worldwide who need humanitarian food assistance.

Ms. Pandor, meanwhile, criticized the Countering Malign Russian Activities in Africa Act passed by the U.S. House of Representatives in May, which would in part identify Africans working with Russians sanctioned by the United States.

Gustavo de Carvalho, a senior researcher on Russia-Africa relations at the South African Institute of International Affairs, said African countries do not simply pick sides between the West and China or Russia, but are driven by self-interest.

“In some instances, it’s slightly more pragmatic,” he said.

Many South African citizens have called for Cyril Ramaphosa, the president, to condemn Russia, but he has avoided doing so.

He traveled in June to a multinational summit in Beijing before flying to a Group of 7 meeting in the Bavarian Alps. In China, Mr. Ramaphosa agreed to a declaration calling for talks between Kyiv and Moscow, along with impartial humanitarian assistance. In Germany, South Africa’s main summit statement dodged the Ukraine issue, and instead focused on climate change and energy policy.

On Monday, Ms. Pandor took a similarly distanced position on tensions between the United States and China, saying getting involved would be destructive for African nations and other countries.

“These are two great powers, the two biggest economies in the world,” she said. “They’ve got to find a way of working together to allow us to grow.”