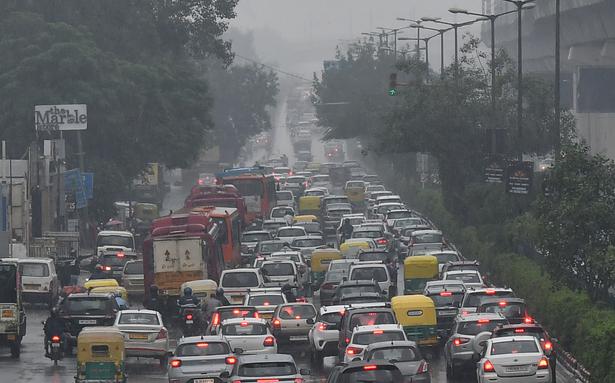 People stranded for hours on roads because the Delhi government did not remove silt from major drains in time, says BJP; weather department forecasts more rain over the weekend; maximum temperature drops six degrees below normal

People stranded for hours on roads because the Delhi government did not remove silt from major drains in time, says BJP; weather department forecasts more rain over the weekend; maximum temperature drops six degrees below normal

Traffic was thrown out of gear on Friday as several key road stretches were waterlogged after heavy rain for the second consecutive day in the Capital. The BJP lashed out at the Delhi government over the lack of monsoon preparedness and the state of the city’s drainage system.

The Delhi government was not available for comment on the BJP’s allegations.

The India Meteorological Department (IMD) has forecast rain over the next two days after which the monsoon is likely to reduce significantly across north-west India.

A Public Works Department (PWD) official said traffic movement slowed down mainly due to continuous rain and no major waterlogging was reported throughout the day.

According to the official, only 25 complaints regarding waterlogging were received on Friday and vulnerable points such as Minto Bridge and Pul Prahladpur underpass did not witness waterlogging.

Delhi received 72 mm of rainfall in 24 hours ending at 8.30 a.m. on Friday. Safdarjung observatory, which is the base station for Delhi’s weather, received only 8 mm of rainfall between 9 a.m. and 5.30 p.m.

The maximum temperature settled at 27.6 degrees Celsius, which was seven degrees below normal.

The rainfall helped cover Delhi’s rain deficit this season, which dropped from 35% before this spell of rain started, to 23%.