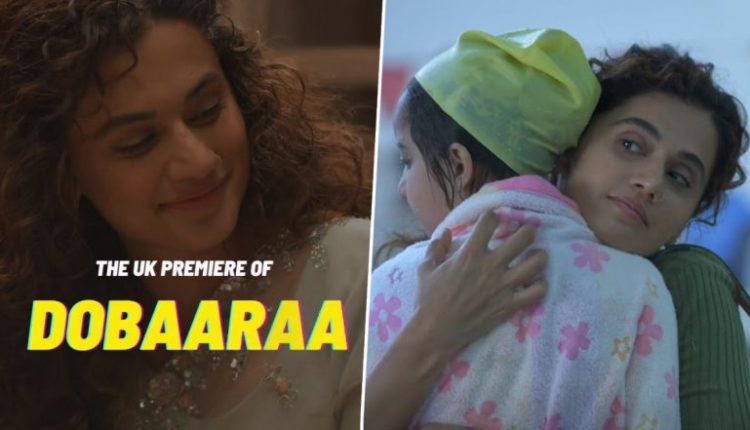 After premiering at London Film Festival, Taapsee Pannu-starrer will now be screened at Fantasia Film Festival in Canada. Sharing the update, Taapsee took to Instagram Story and wrote, “For the love of their beloved. Dobaaraa in Fantasia Film Festival.” The film, which is helmed by Anurag Kashyap, will be showcased amongst many other Korean, Spanish, and Japanese films at the festival, which will take place from July 14 – August 3, with its Frontieres International Co-Production Market being held July 21 – 24. Shabaash Mithu Song Fateh: Romy and Charan’s Inspirational Track for Taapsee Pannu’s Mithali Raj Biopic Is Out (Watch Video).

Produced by Shobha Kapoor and Ekta Kapoor’s Cult Movies (a new wing under Balaji Telefilm) and Sunir Kheterpal and Gaurav Bose of Athena, ‘Dobaaraa’ is touted as a new age thriller. It is the official Hindi adaption of Oriol Paulo’s 2018 Spanish-language film MirageThe film also stars Pavail Gulati who earlier shared screen space with Taapsee in Thappad. Commenting on acting under the direction of Anurag Kashyap once again, Taapsee said that she feels “she had no break in between.” Shabash Mithu: Taapsee Pannu Expresses Happiness As the Film’s Trailer Receives Praise, Says ‘It’s Extremely Encouraging’.

“I think I have been so consistently in touch since Manmarziyaan,” she shared

“After Thappad, it just feels like a continuation of sets. It didn’t feel like we had a break in between. Even after Dobaaraa, we have been in consistent contact. It doesn’t feel like we are working up after a break or we were disconnected,” Taapsee added. Apart from ‘Dobaaraa’, Taapsee will also be seen in Shabaash Mithu, which is based on the life of cricketing legend Mithali Raj, who redefined the gentleman’s game not only in India but globally too.