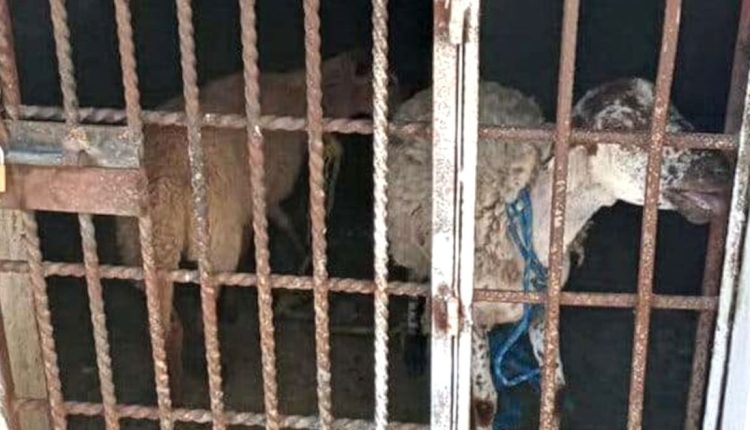 Owner Reyna Morales has complained to the police as she believes the prison sentence for her sheep grazing outside a hostel in Santa Catarina Yosonotu, Mexico, is animal cruelty

The sheep will remain in the town’s jail until the owner pays a fine, repairs the damage, and pledges to keep the animals tied in a pen (

Eating grass in the wrong place has landed two sheep behind bars in jail.

Indigenous elders ordered the animals to be jailed after they were caught grazing around a hostel and they will now stay in the town’s jail until their owner pays a fine and repairs the damage.

Owner Reyna Morales – a mother of young children – will also have to pledge to keep the animals tied in a pen in order for them to be released.

The pair had been feasting on the grass on the grounds of the Ignacio Zaragoza hostel in the municipality of Santa Catarina Yosonotu in the southern Mexican state of Oaxaca.

Reyna has now complained to the police as she believes the prison sentence is animal cruelty.

She told local media her sheep are being kept tethered behind rusty bars without food and water and fears they will starve to death.

Reyna also claims that her family is being intimidated by indigenous leaders to prevent her from exposing the row.

And she has appealed for financial help from community members because she cannot afford to pay the fine.

Following Reyna’s allegations, the Attorney General’s Office in Oaxaca stated on May 11 that they have opened an investigation “for the crime of Animal Cruelty after two vertebrate animals (sheep) were locked up in the municipal jail”.

In other news, hair-raising footage has emerged of a 10ft long shark biting down on a boat’s motor.

Earlier this week, captain Matt Zen went to Coral Bay in Perth, Australia, with his friends for their annual fishing trip – but they had no idea what was about to happen.

For about an hour, the group had been fighting with a three-meter-long copper shark they had been able to hook when things took an unexpected turn.

In a video shared on Instagram, the giant beast – also known as a bronze whaler – can be seen moving in the water at the end of the boat when they suddenly took a big bite onto the vessel’s motor.

Filthy, disgusting ‘cell’ where cruel family locked dog inside covered in his waste