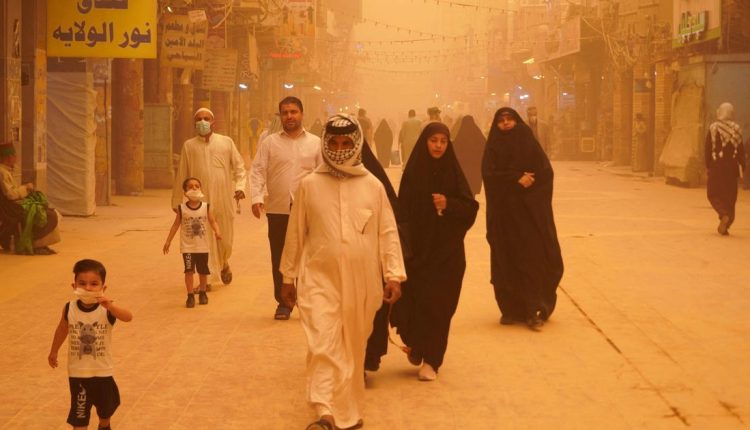 A heavy sandstorm in Iraq closed schools and offices and sparked mass hospital admissions as thousands suffered with breathing difficulties.

Today’s extreme weather is the latest of what Iraqi officials say is an unprecedented number of sandstorms to blast the country in recent weeks.

Authorities in Baghdad, including the Education Ministry, declared a day off for local government institutions, with the exception of health services.

Hundreds of people across the capital and southern cities went to hospitals with breathing difficulties, medical officials said.

Baghdad International Airport said in a statement it was closing its airspace and halting all flights until further notice because of low visibility.

Baghdad’s airport was closed down due to the storm
(

At least one sandstorm a week has hit Iraq in the past few weeks in what Iraqis say is the worst such spate in living memory.

“It’s every three or four days now,” said taxi driver Ahmed Zaman, 23. “It’s clearly a result of climate change and lack of rain, whenever there’s wind it just kicks up dust and sand.”

In Baghdad and southern Iraqi cities, a red haze of dust and sand reduced visibility to just a few hundred feet.

“We’ve had 75 cases of people with respiratory problems,” said Ihsan Mawlood, an accident and emergency doctor in a Baghdad hospital.

Just weeks earlier residents of six of Iraq’s 18 provinces, including Baghdad, were blasted with thick clouds of dust blanketing the sky.

Duststorms have increased dramatically in frequency in Iraq in recent years, driven by soil degradation and intense droughts made worse by climate change, with rising average temperatures and sharply lower rainfall.

As the storm swept across Iraq at the start of May, it shrouded the capital Baghdad and the holy city of Najaf in ghostly orange clouds of choking dust.

“One death has been recorded in Baghdad” and hospitals “have received no less than 5,000 cases so far,” health ministry spokesman Seif al-Badr said in a statement at the time.

Those hit hardest were people suffering from “chronic respiratory diseases such as asthma”, and the elderly who suffer in particular from heart ailments, he said.

Badr added the majority had since been discharged and most cases were of “medium or low intensity”.

The elderly and people with respiratory issues have been particularly hard
(

The fine dust particles can cause health problems such as asthma and cardiovascular ailments, and also spread bacteria and viruses as well as pesticides and other toxins.

Authorities in Al-Anbar and Kirkuk provinces, north of the capital, urged people “not to leave their homes”, said the official INA news agency.

The storms are expected to grow more intense with worsening climate change because higher temperatures and more irregular rainfalls dry out land faster and accelerate desertification.

During previous storms residents have been advised not to leave home
(

Sandstorms also cause economic damage by reducing visibility, sometimes to near zero, shuttering airports and highways and causing damage to buildings, vegetation and solar panels.

The central province of Salaheddin reported more than 300 cases, while Diwaniya and the province of Najaf, south of Baghdad, each recorded about 100 cases, the news agency added.

Oil-rich Iraq, despite its mighty Tigris and Euphrates rivers, is classified as one of the world’s five countries most vulnerable to climate change and desertification.

Scientists say climate change amplifies droughts and that their intensity and frequency in turn threaten food security. Experts have said these factors threaten to bring social and economic disaster in the war-scarred country.

In November, the World Bank warned Iraq — a country of 41 million people — could suffer a 20-percent drop in water resources by 2050 due to climate change.

The United Nations says about one-third of Iraq’s population now lives in poverty.

The effects of low rainfall have been exacerbated as the levels of the Tigris and Euphrates drop because of upstream dams in neighbouring Iran and Turkey.

The environment ministry said the weather phenomenon could be addressed by “increasing vegetation cover and creating forests that act as windbreaks”.

Iraq is the fifth most vulnerable country in the world to the climate crisis, according to the United Nations.