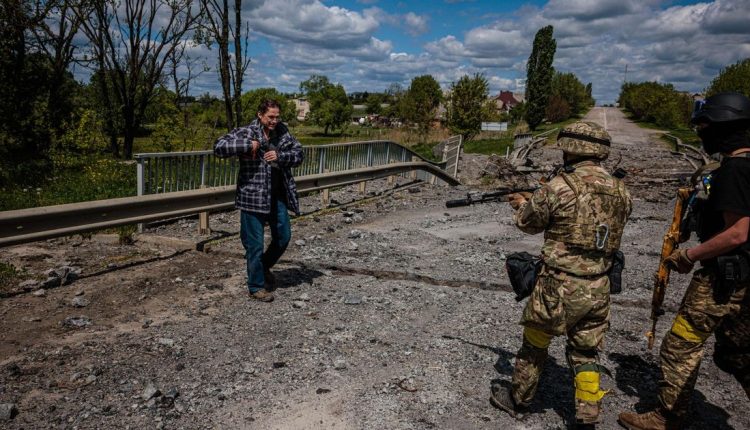 It has been nearly three months since Vladimir Putin’s Russia launched its invasion of Ukraine that has seen devastation wrought upon the country.

But Russia has not seen the quick successes it may have expected faced with fierce resistance from its neighbour.

Below Chris Hughes answers all the key questions on the invasion and why Russia has failed to secure victory so far.

Why has the invasion faltered?

It was over-ambitious and launched using a badly funded, ill-disciplined and poorly trained military against a courageous, highly motivated defending force that has performed to great effect.

Putin’s commanders led attacks on several fronts, from the east, where they have been fighting for years, north from Belarus and the south.

In the east they are bogged down, up against well-trained, battle hardened, disciplined Ukrainian troops fighting an existential battle.

The Russians seem not to be invested in the fight and suffer poor morale.

Many Russians entered the battle unaware of where they were, their commanders arrogantly hoping they would take Kyiv within days.

It takes roughly four to one in numbers to take a city and Putin’s plan to overrun Kyiv and other cities was based on shockingly poor intelligence of Ukrainian resolve and capability.

Why have Russian troops been so bad?

They have been badly neglected over the years. Poorly trained, badly fed and sent into battle with insufficient supplies, which even included rations that were five years out of date.

Some had so little fuel they broke down. Top down corruption in Russia has led to funding being diverted into the wrong hands, leading to a cynical and under-performing force.

Discipline is a huge issue and senior officers have been sent to the frontline to try to control troops, before getting killed.

The backbone of any army is its non-commissioned officers and Russia’s are badly trained. Many recruits are complete novice conscripts.

What is happening on the ground?

Russian troops fled the outskirts of Kyiv weeks ago to concentrate on the mission in the east, where the two sides have been battling since 2014.

Russian troops fled the outskirts of Kyiv weeks ago
(

They tried repeatedly to take the north-eastern city of Kharkiv and reports indicate they have lost this crucial area.

Despite grandiose Russian claims of a huge victory in the key city of Mariupol, Ukraine ’s troops are still holding out in the steel works and their struggle is now a symbol of Ukrainian defiance and bravery.

Russia is barely able to claim having taken any major cities in Ukraine and is failing to keep hold of ground it had once dominated. The Ukrainian counter seems to be gaining ground and momentum.

What will happen next?

In the short term it appears Russia will continue to take heavy losses while claiming the lives of Ukrainian civilians with brutal bombardments.

The war began in late February
(

Ukrainian troops are rallying but this next stage in their defence is crucial. Until now they have been constantly flanking Russian forces, ambushing them and cutting off supply lines.

From 2014, Ukraine and pro-Russian forces fought running battles in an everchanging theatre of war but then settled into battlefronts with long-term positions. It is possible this will happen again.

Could the war end suddenly?

This is unlikely as Putin has backed himself into a corner and has to save face, even with a small victory in the Donbas region, which he may have to settle for.

But Ukraine has shown no sign that it is ready to settle on such a victory for Putin. Western diplomats are returning to Kyiv, a further indication the war is settling and is likely to rumble on for a few years.

It is thought it will be concentrated in Donbas with long-range Russian missile attacks on Western supply lines as Putin tries to halt the stream of support that Ukraine’s troops are getting.

Will the Russian war criminals ever face justice?

There are indictments in Kyiv against named Russian troops for crimes but major international court war crimes cases are unlikely for years.

The weight of proof needed is enormous and not just a case of proving civilians were killed. There is an avalanche of anecdotal evidence against thousands of Russian troops but it has to be nailed down.

Vladimir Putin’s troops REPELLED all the way back to border by Ukraine, NATO says
0
Share