Riteish Deshmukh Has the Most Hilarious Birthday Wish for Genelia Deshmukh, Calls Wife His ‘Critic and Biggest Cheerleader’ 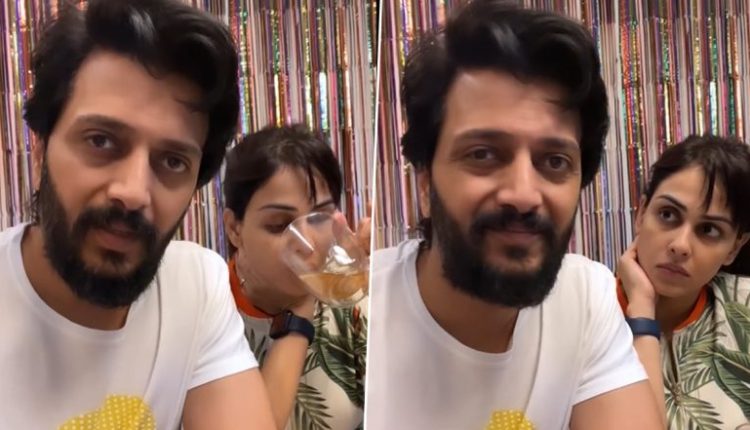 Riteish Deshmukh and Genelia D’souza are one of the most adorable and admirable couples in B-town. They often share funny videos on social media, giving their fans a fit of laughter every time. So, naturally, as Genelia turned a year older on Friday, Riteish shared yet another hilarious reel to extend wishes. Genelia Deshmukh Birthday: 7 Sarees to Steal From the Gorgeous Actress’ Wardrobe (View Pics).

Taking to his Instagram, Riteish wrote, “Today I woke up with my heart racing and a smile that I can’t wipe off my face… it’s raining outside and even the heavens know it’s a special day. Happy Birthday to my best friend, my partner, my lifeline, my critic, and my biggest cheerleader …. kaahii lok premaat veddii hotaat, kaahii veddyaa saarkhii prem krtaat… mlaa tujhN vedd aahe @geneliad.You are my forever waala love. #happybirthdaygenelia”. Check it out:

Genelia responded to the video and wrote a sweet note for Riteish – “My loverrrr…Stuck onto youLove you forever and ever and ever”. Riteish and Genelia have been very active on social media. The couple tied the knot in 2012, and are parents to two adorable kids – Rahyl and Riaan. The couple recently launched their vegetarian meat brand ‘Imagine Meats’ recently. Genelia Deshmukh Birthday: A Look at Her Most Adorable Videos With Hubby Riteish Deshmukh.

Meanwhile, talking about Genelia, she has completed filming for Mister Mummy which is directed by Shaad Ali and is scheduled to release in the latter part of the year. Apart from Mister Mummy, she has also started working on a new project titled Trial Period, helmed by Aleya Sen. Manav Kaul is also a part of the film. What’s more, both Genelia and Ritiesh will be next seen together in Ved, a Marathi movie that also marks Genelia’s Marathi film debut.