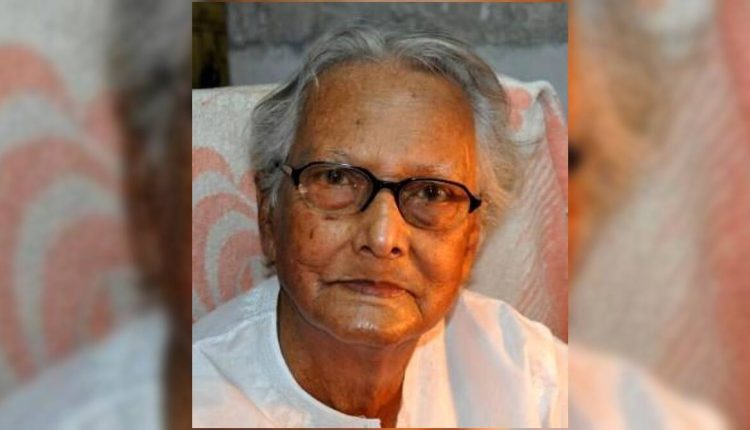 If you were raised in a Bengali household, you would be familiar with the work of Narayan Debnath, a noted comics artist, writer and illustrator, who brought to life cult cartoon characters like Bantul the Great, Handa Bhonda, and Nonte Phonte. The artist passed away today, January 18, after a prolonged illness at the age of 96, leaving behind a legacy that many artists aspire to have.

Debnath, a Padma Shri awardee, even held the record of running the longest comics series by an individual artiste for Handa Bhonda, which has now completed 53 years. He was the first and the only comics artist from the country to have received the D. Litt. degree — ‘Litterarum Doctor’ or ‘Doctor Litterarum’, a degree in humanities that is considered to be a higher doctorate after the Doctor of Philosophy (Ph.D.) degree.

Getting nostalgic- On Jan 31, 2021 when Smt. sudesh Dhankhar & myself went to enquire about health #NarayanDebnath at Belle Vue Clinic, the legend blessed us and instantly drew this masterpiece to be ever cherished by us. Pray Almighty to bestow eternal peace to the noble soul. https://t.co/ieOf4Y9Qzx pic.twitter.com/sc9YKS5rHH

The artist has also been credited for creating ‘Rabi Chobi‘ published to celebrate the birth centenary of Nobel laureate Rabindranath Tagore in the May 1961 issue of a magazine called Anandamela. His works were a constant in Suktara, another Bengali monthly magazine.

Debnath’s works are evocative of childhood nostalgia. He was born in Shibpur, Howrah, India, where he spent most of his life. The artist had once confessed in an interview published in ‘Narayan Debnath Comics Samagra‘ that visual arts interested him from a very early age. While his family was in the business of gold retailing — and there was scope for him to design jewellery — he studied fine arts at the Indian Art College for five years.

Shri Narayan Debnath Ji brightened several lives through his works, cartoons and illustrations. His works reflected his intellectual prowess. The characters he created will remain eternally popular. Pained by his demise. Condolences to his family and admirers. Om Shanti.

There are four volumes of Narayan Debnath Comics Samagra, in which the artist recounted many aspects of his life, including the fact that on his wedding day, Mahatma Gandhi was assassinated, and that was shocking for him and his guests.

Interestingly, the artist had started as a freelancer in advertising agencies, making movie slides and logos. Between 1950 and 1961, Debnath would illustrate in a number of children’s books including adventure novels and translated Western classics. But, his journey in comics officially began in 1962 with Handa Bhonda in Suktara.

Extremely sad that the noted litterateur, illustrator, cartoonist, and creator of some immortal characters for children’s world, Narayan Debnath is no more. He had created Bantul the Great, Handa- Bhonda, Nonte- Fonte, figures that have been etched in our hearts for decades.

Those who have read ‘Bantul‘ will know of his burly physique and strength, his helpful nature that made him almost invincible. The artist gave the character these qualities during the Bangladesh War of Liberation, when he was beseeched by editors and publishers to rouse such sentiments in people. In essence, Bantul was India’s ‘Captain America’, a superhero, who could walk into a battle and take on tanks, missiles, bullets, etc.

It is said that ‘Bantul The Great‘ was his first comic in colour. He created the superhero in his mind while returning from Kolkata’s College Street. The name also came to him instantly.

The illustrator had been under treatment at a private hospital in Kolkata for the last 25 days. Doctors said his condition started deteriorating in the morning and he breathed his last around 10 am.