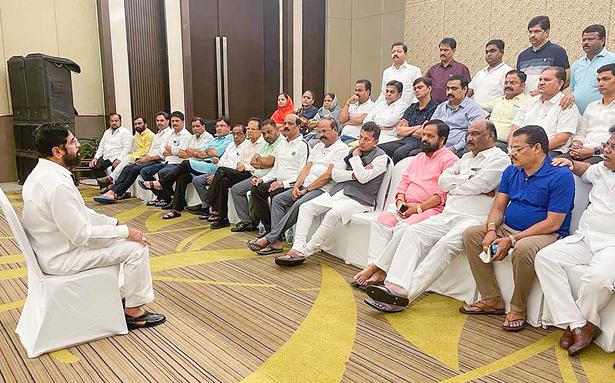 Pawar says they have to prove majority, but no BJP leader can guide them in it; rebel group claims to have sent letter to Deputy Speaker with the signatures of 42 MLAs

Pawar says they have to prove majority, but no BJP leader can guide them in it; rebel group claims to have sent letter to Deputy Speaker with the signatures of 42 MLAs

Days after his revolt against Maharashtra Chief Minister Uddhav Thackeray and the Shiv Sena-led coalition government in the State, rebel party leader Eknath Shinde on Thursday said the entire operation of splitting the party was supported by a “national party”. He, however, did not say it was the Bharatiya Janata Party (BJP).

In response, Nationalist Congress Party (NCP) chief Sharad Pawar advised the rebels that no BJP leader would come to guide them when they arrived in Mumbai to prove the majority in the Legislative Assembly.

The Sena on Wednesday removed Mr. Shinde and appointed Ajay Chaudhary the legislature party leader, to which the rebel group has objected, claiming majority.

Mr. Zirwal’s office said that no new letter had been received. “The group leader is decided based on the party chief’s letter, and I have received a letter from Sena chief Uddhav Thackeray naming [Ajay] Chaudhary as the legislature party leader, which I have accepted,” Mr. Zirwal said.

The video released by Mr. Shinde’s aides on Thursday evening shows him addressing the rebel MLAs, and claiming the support of a “national party”. He is seen saying: “No matter what happens, we will win. As you said, that is a national party, a superpower. Pakistan…you know what happened.”

“They have told me, that the decision taken by us is historic. You have all the strength of ours. If you need anything, we will not let you down. This will be experienced whenever we will need any help.”

Minutes later, Mr. Pawar held a press conference at which he read out the names of national parties in the country, and asked which entity other than the BJP could be behind this. “The Maharashtra Assembly is where [the State] government’s majority will be decided after a floor test and not Guwahati [where the rebel group is camping]. I have seen such a condition many times before, and my assessment is that the government will prove majority. I do not think that the Assam BJP or local leaders would be able to come to guide them [the rebel MLAs] for this,” he said.

This is the first time in three days that Mr. Pawar has held a press conference on the political crisis in Maharashtra. Earlier, he held a meeting of NCP leaders, where the party decided to stand firmly with Mr. Thackeray.

Mr. Shinde’s group has claimed the support of 46 MLAs, out of which 37 are Sena MLAs and nine are Independents.

When pointed out that the rebel MLAs’ grievances spanned from issues such as commitment to Hindutva to the allocation of funds, Mr. Pawar scoffed: “We have been in power for two-and-a-half-years. Where was this Hindutva issue then? Funds are given to all and Finance Minister [Ajit Pawar] has clarified that. I think these are nothing but excuses being used by them.”

Maharashtra State Congress president Nana Patole accused the BJP of using Central agencies to destabilise governments led by rival parties across the country and that the same was happening in Maharashtra.