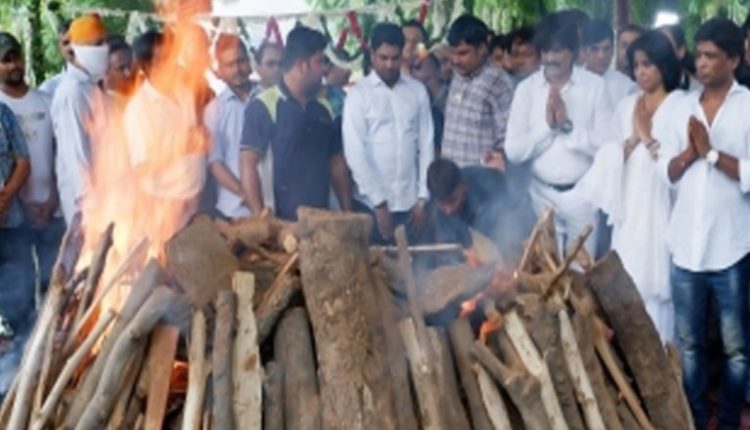 Popular comedian Raju Srivastava, who passed away on September 21 after a 40 day battle in the ICU at the All India Institute of Medical Sciences (AIIMS), has been cremated at the Nigambodh Ghat in New Delhi. Raju Srivastava had suffered a heart attack on August 10 while working out in a gym. He was then rushed to AIIMS. Since then, he was on a ventilator. PETA India Seeks Honour for Raju Srivastava; When Comedian Had Partnered to Highlight Horse Cruelty at Weddings.

On Thursday morning, Raju Srivastava’s mortal remains were taken in an ambulance covered with white flowers to the crematorium around 9 in the morning for the funeral. His son Ayushmaan performed the last rites as per Hindu rituals. When Raju Srivastava Boarded a Train to See an Ailing Amitabh Bachchan.

Check Out the Video Below:

The funeral was attended by veteran poet-humourists Surendra Sharma, Ashok Chakradhar and filmmaker Madhur Bhandarkar. Fellow comedians and friends such as Sunil Pal and Ahsaan Qureshi too were in attendance. Raju Srivastava is survived by Shikha, whom he married in 1993, and their children Antara and Ayushman.

(The above story first appeared on Today News 24 on Sep 22, 2022 05:05 PM IST. For more news and updates on politics, world, sports, entertainment and lifestyle, log on to our website todaynews24.top).

Kirti on how her and Angad’s lives have changed: He’s a dad and I’m separated | Web Series