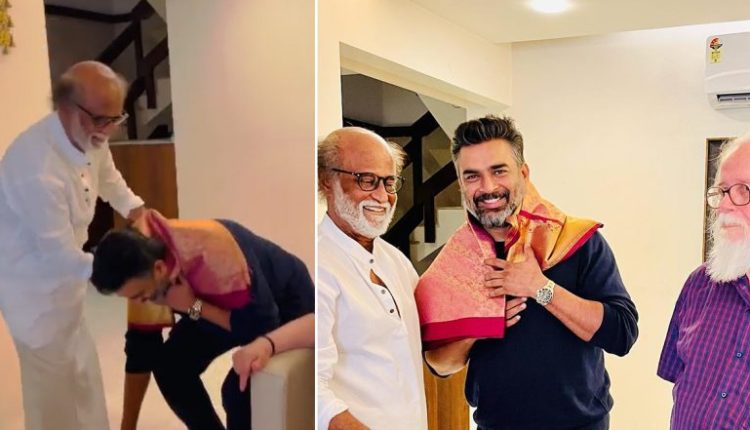 R Madhavan recently met megastar Rajinikanth along with the former scientist Nambi Narayanan, days after the release of the former’s film Rocketry. On Sunday, Madhavan took to Instagram and dropped a string of images and videos from their meeting. Rocketry The Nambi Effect: Rajinikanth Lauds R Madhavan For Portraying Nambi Narayanan’s Story Realistically In His Directorial Debut.

In the images, Rajinikanth is seen felicitating Madhavan and Nambi Narayanan at his house by giving them a bright traditional stole. Madhavan also touched Rajinikanth’s feet and sought his blessings. “When you get the blessings from a one-man industry and the very Legend himself, in the presence of another Legend .. it’s a moment etched for eternity. Thank you for your kindest words and affection #rajnikanth sir. This motivation has completely rejuvenated us.

We love you as does the whole world,”Madhavan captioned the post. Soon after Madhavan shared the post, his fans flooded the comment section. “So well deserved,” actor Tisca Chopra commented. “What a moment! Amazing reward for an amazing movie and of course the amazing hero,” a fan wrote. Roketry’s R Madhavan Tweets It Was Very ‘Ignorant’ of Him to Call the Almanac a ‘Panchang’.

For the unversed, Rocketry: The Nambi Effect was released on June 1. The film features Madhavan in the lead role of scientist Nambi Narayanan. The movie was shot in India, France, Canada, Georgia and Serbia. Shah Rukh Khan and Suriya played cameos in the film. Talking about the superstars’ cameos, Madhavan revealed that they did not charge a single penny.

“The two (SRK and Suriya) did not charge a single penny for their work in the film. They did not charge anything for caravans, costumes, and assistants. In fact, Suriya flew out to shoot in Mumbai with his crew on his own money. He did not charge for the flights or for the dialogue writer who translated his lines in Tamil.

There are a lot of good people in the industry. I am an outsider and I have met several people in my career who wholeheartedly helped me. Just on my request, Amit ji (Amitabh Bachchan) or Priyanka Chopra post a tweet (to show their support for the film). I am grateful for their love and respect,” Madhavan had shared. Rocketry was released in six languages worldwide, including Hindi, English, Tamil, Telugu, Malayalam and Kannada.

General Motors’ Cruise burns through over $5 million a day

TUDUM 2022: Unseen Clip From Squid Game Season 1 Shown at Netflix Event, Could This…