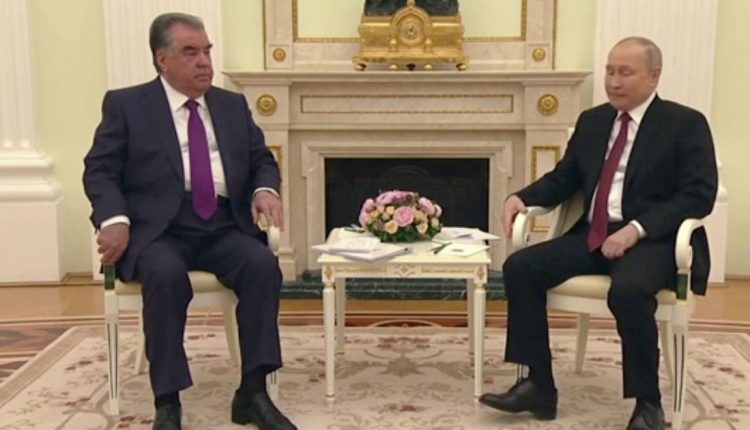 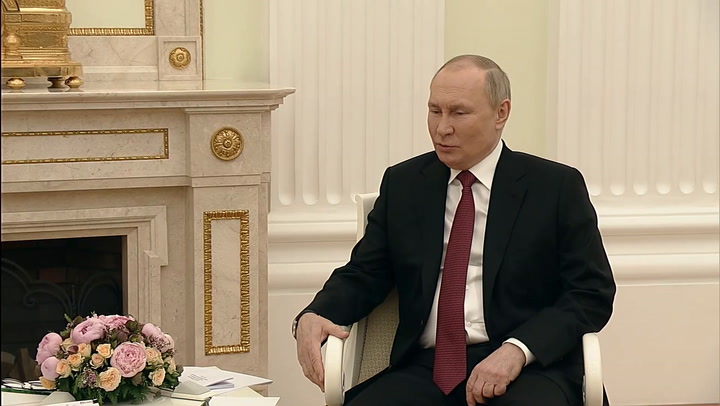 Vladimir Putin fidgets his feet during meeting with Rahmon

Vladimir Putin was seen manically moving his feet and looking frail in a meeting with a head of state while a body language expert claims he looks “astonishingly weakened”.

The Russian president continuously tapped his feet during footage of a meeting in Moscow with Tajikistan President Emomali Rahmon.

The under pressure leader was seen erratically moving his left foot around before doing the same with his right foot, reported the Express.

At the same time he was using one arm to securely grip the arm of the chair where he was sitting.

It comes amid constant rumours about his alleged ill health with some reports that he is suffering from cancer.

His face is looking bloated suggesting that he could be taking steroids, it has been repeatedly claimed.

And last month he was seen slouching and tightly gripping a table during a televised meeting with Russian Defence Minister Sergei Shoigu.

Now Professor Erik Bucy, a body language expert from Texas Tech University, says he no longer looks the leader who prided himself on appearing physically strong.

“It’s an astonishingly weakened Putin compared to the man we observed even a few years ago,” he told The Sun.

Putin was filmed during a meeting with Tajikistan President Emomali Rahmon
(

On May 9 at the Victory Day celebrations in Moscow, he also cut a grey and frail figure who had a blanket on his lap while he sat in the stands watching the display.

Former head of the British Army Lord Dannatt said Putin looked “puffy” and did not appear to be “moving freely”.

Lord Dannatt told Sky News: “I was really just commenting on how President Putin looked. He doesn’t seem to be moving as freely and as easily as one has seen him do to in the past.

“I think we’ve all commented that, actually, he looked pretty puffy around the face.

Putin was fidgeting and also staring into space
(

“I don’t know how well or how unwell he is, there’s people circulating rumours he’s got cancer of some sort. I don’t know.

“But if he goes under a bus, metaphorically or realistically, will the replacement be any better?”

The spotlight has been on Putin’s health since he launched his brutal invasion of Ukraine in February which appears to have gone far from to plan.

Moscow has had to switch the focus of its offensive to the eastern regions after facing stiff resistance during an attack on the capital Kyiv.

In a latest assessment, British military intelligence said Russia may have lost a third of the invasion force it sent into Ukraine.

The Ministry of Defence (MoD) said the Russian campaign in the east of Ukraine had “lost momentum” and was now “significantly behind schedule”.

Vladimir Putin’s troops REPELLED all the way back to border by Ukraine, NATO says
0
Share