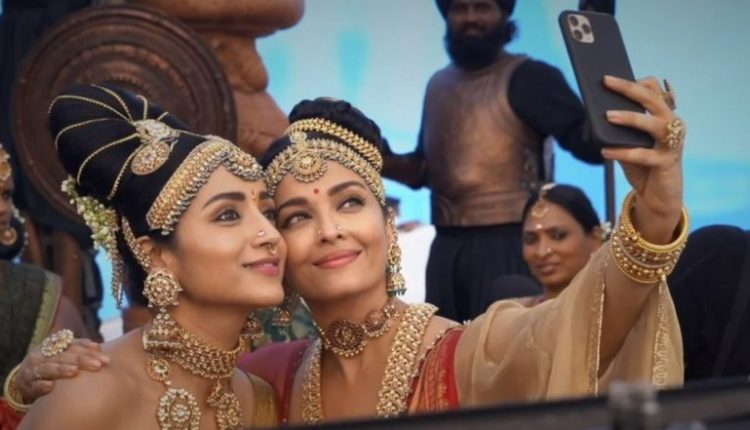 Actor Trisha Krishnan dropped a picture with her co-star Aishwarya Rai Bachchan from the sets of their upcoming movie Ponniyin Selvan on social media. Taking to her Twitter handle on Thursday, the Khatta Meetha actor treated fans with a BTS picture, which got viral in no time. Ponniyin Selvan I Art Director Thota Tharrani Shares How Ancient Temples Became Reference Points for Mani Ratnam’s Magnum Opus.

In the picture, the actors were seen dressed in their characters’ outfits. The ‘Devdas’ actor can be seen keeping her arms around Trisha while taking a selfie. The divas looked beautiful as they kept their faces close to each other for a selfie. Sharing the picture, she wrote “Ash,” with a hug emoticon. Ponniyin Selvan I Star Chiyaan Vikram Attends Wedding of Housekeeping Unit Member’s Son.

Soon after the picture was uploaded, the actor’s fans and followers chimed into the comment section. One of the users wrote, “Gorgeous.” Another comment reads, “Miss world n miss chennai in frame.” In the film, Aishwarya will be seen in dual roles. She will play queen Nandini, the princess of Pazhuvoor, who is on a mission to seek vengeance, as well as Mandakini Devi in the historical drama. Fans have been going gaga over her look ever since the poster was released.

On the other hand, Trisha will be seen as Kundavai and Ravi will portray the character of Arunmozhi Varman. Apart from Aishwarya and Trisha, the film also stars an ensemble cast of south actors Kennedy John Victor, Karthik Sivakumar and Jayam Ravi. Vikram will portray the role of Aditya Karikalan, Karthi will play Vanthiyathevan. Directed by Mani Ratnam, ‘Ponniyin Selvan’ is a pan-India film.

Trisha Krishnan With Aishwarya Rai Ponniy on Selvan I Sets

Ponniyin Selvan-Part 1 is a cinematic adaptation of author Kalki Krishnamurthy’s Tamil novel of the same name which was released in the form of a series during the 1950s. It marks the second collaboration of Aishwarya with south actor Vikram after their critically acclaimed film Raavan in 2010, and the fourth collaboration with director Mani Ratnam after ‘Iruvar’ in 1997, Guru in 2007 and Raavan in 2010. The A.R Rahman musical is all set to hit the theatres on September 30, in Hindi, Tamil, Telugu, Malayalam and Kannada. The big-budget period film will be released in multiple parts.

Adam Levine And Behati Prinsloo Are ‘Trying to Move Forward As A Couple’ After Cheating Scandal, Source Says

Neymar Is Still a Singular Star, but He Has More Help on Brazil