PM Narendra Modi To Host CWG 2022 Medal Winners at His Residence Tomorrow, Boxer Nikhat Zareen Likely To Get an Autograph on Her Boxing Gloves 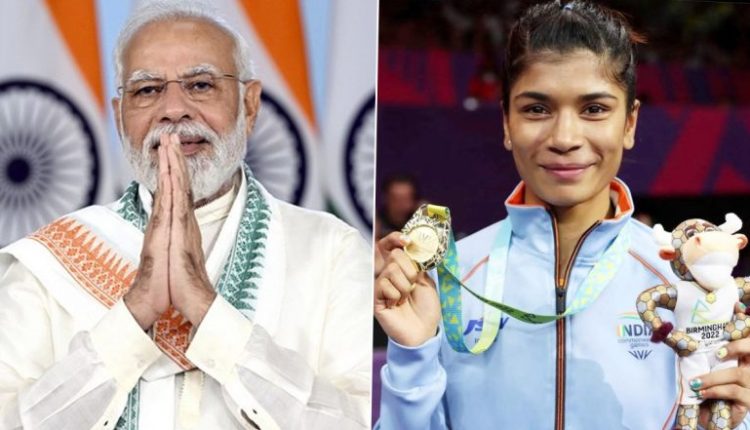 New Delhi [India], August 12: Prime Minister Narendra Modi will host all the medal winners of the Commonwealth 2022 games at his official residence at 11 am on Saturday.

From July 28 to August 8, nearly 200 Indian athletes competed for medals across 16 different sports at the Commonwealth Games 2022 in Birmingham. PM Narendra Modi To Host All Medal Winners of CWG 2022 at His Official Residence in Delhi Tomorrow at 11 AM.

India wrapped up its Commonwealth Games 2022 campaign at fourth position with 61 medals (22 gold, 16 silver and 23 bronze). Wrestling topped the medal chart with 12 medals including six gold while weightlifting accounted for 10 medals.

India has delivered its fifth-best performance of all time in their Commonwealth Games history, with their best being a total of 101 medals when the games were held at home in 2010.

One of the major highlights of the mega event was the clinching of a gold medal by Nikhat Zareen. PM Narendra Modi Congratulates Boxer Nikhat Zareen for Winning Gold Medal at CWG 2022, Says ‘She Is a World Class Athlete Who Is Admired for Her Skills’.

After winning the medal in the final of the women’s 50kg Light Flyweight category, Zareen said she is excited to meet Prime Minister Narendra Modi and added that she will take his autograph on her boxing gloves.

Zareen lived up to her ‘world champion’ status as she dominated Carly across all three rounds. She won by 5-0 on basis of points scored.

“I am very excited to meet Prime Minister Modi; I took a selfie with him last time and want a new one now. Last time, I took his autograph on my T-shirt, now I will take it on my boxing gloves,” Nikhat Zareen had told ANI after winning the gold on August 07.

The Commonwealth Games 2022 came to an end with a stunning closing ceremony at the Alexander Stadium in Birmingham on Monday.