Plastic Ban in India: Why Is Single-Use Plastic Being Banned in the Country? Know List of Items To Be Prohibited From July 1; Here’s All You Need To Know 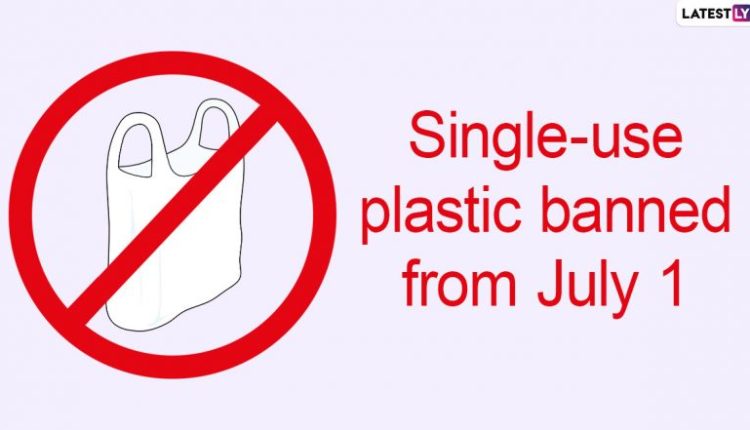 In simple terms, single-use plastics that have low utility and high littering potential will be banned with effect from July 1. Last year, the Ministry for Environment, Forest, and Climate Change issued a gazette notification announcing the ban. Plastic Ban: BIS Issues Standards for Alternative Products Due to Single Use Plastic Ban.

Post this, the ministry defined a list of items that will be banned from next month. “The manufacture, import, stocking, distribution, sale, and use of following single-use plastic, including polystyrene and expanded polystyrene, commodities shall be prohibited with effect from the 1st July 2022,’’ the Ministry notification said.

Besides the ministry, the Central Pollution Control Board (CPCB) also announced a Comprehensive Action Plan which is aimed at strengthening India’s commitment to ban identified single-use plastic items.

What is single-use plastic?

Single-use plastics (SUPs) which are also known as disposable plastics are those items that are discarded after one-time use. Besides plastic bags, single-use plastic items include disposable cutlery, straws, and stirrers, food containers, processed food packets and wrappers, cotton bud sticks, etc. Besides SUPs, plastic bags of thickness less than 120 microns are also likely to be phased out from December 31, 2022.

The impact of SUPs is such that in a 2021 report by the Australian philanthropic organisation, the Minderoo Foundation, single-use plastics accounted for a third of all plastic produced across the globe. Besides, single-use plastic also accounts for the majority of plastic discarded “all of which is burned, buried in landfills or discarded directly into the environment”, the report said.

According to the United Nations Environment Programme (UN Environment), plastic can take over a thousand years to decompose if it is not recycled properly.

It must be noted that in September 2021, the Ministry of Environment had put a ban on polythene bags under 75 microns, thus widening the limit from the earlier 50 microns. There is also a complete ban on sachets using plastic material for packing, storing, or selling pan masala, gutkha, and tobacco under the Plastic Waste Management Rules, 2016. Plastic Ban in West Bengal: Buyers of Sub-75-Micron Plastic Bags To Face Penalty of Rs 500 From July 1.

Sources from the environment ministry said that the choice for the first set of single-use plastic items for the ban was based on “difficulty of collection, and therefore recycling”.

So the question appears as to why ban earbuds, disposable cutlery, straws, etc were chosen first to be banned from July 1. To this, a ministry official said, “We have chosen these items as they are difficult to collect, especially since most are either small, or discarded directly into the environment – like ice-cream sticks. It then becomes difficult to collect for recycling, unlike the much larger items,” said a Ministry official,” reports Indian Express.

Single-Use Plastic To Be Banned In India From July 1, Know Why And The Habits You Need To Change #TNDIGITALVIDEOS#SingleUsePlastic #PlasticBan #PlasticPollution pic.twitter.com/b2iiHSqWpA

How will the plastic ban be enforced?

The Single-use plastic ban will be monitored by the CPCB and the State Pollution Control Boards (SPCBs), who will report to the Centre on a regular basis. Reports suggest that the CPCB has issued directions at the national, state, and local levels in order to not supply raw materials to industries that engage in banned items.

The CPCB has also ordered local authorities to issue fresh commercial licenses with the condition that SUP items will not be sold on their premises. More importantly, existing commercial licences will be cancelled if they are found to be selling the banned items.

📣From July 1 gvt is banning the manufacturing, distribution, importing, sale, stocking & use of all single-use plastic across the country.

📸Send your pics on why India’s #singleuseplastic ban is important.

Those found flouting the ban will be fined under the Environment Protection Act 1986. Violating the ban could also attract jail of up to five years, or a penalty of up to Rs 1 lakh, or both.

(The above story first appeared on Today News 24 on Jun 27, 2022 12:18 PM IST. For more news and updates on politics, world, sports, entertainment and lifestyle, log on to our website todaynews24.top).