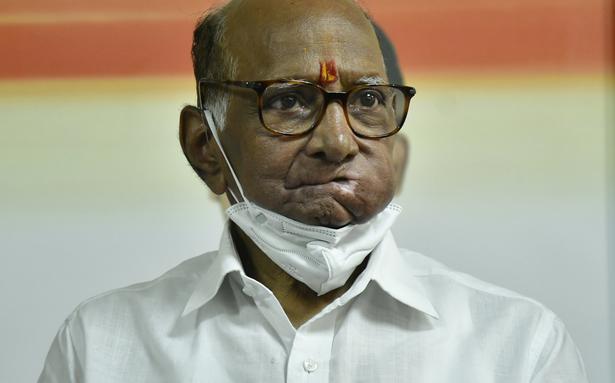 From labelling him an atheist to claiming he started caste politics in Maharashtra, Opposition leaders and right-wing trolls in the State have found a common target in Nationalist Congress Party (NCP) chief Sharad Pawar. The attacks are not purely political; some have gone on to issue death threats, commented on his illness, age and even wished him hell.

The veteran Maharashtra politician — whose stature has been acknowledged even by Prime Minister Narendra Modi, who once had said in a public event that he used to take advice from him — has come under a well-co-ordinated attack from the right-wing ecosystem, both online and offline. The line of attack, however, has been different — while the BJP has questioned his faith, the Maharashtra Navnirman Sena has accused Mr. Pawar of “dividing” Maharashtra along caste lines.

Last week, the Twitter handle of the Maharashtra BJP posted an edited video of Mr. Pawar’s public rally in Satara where he recited a verse by new-age Marathi poet Jawahar Rathod about atrocities on people from lower castes. The tweet said “atheist Sharad Pawar always hated Hindu gods”. The social media troll army immediately picked up the issue and targeted the NCP chief. Joining in the chorus were some BJP leaders, including party MLA Nitesh Rane, who questioned Mr. Pawar’s interpretation of the poem, claiming the poet did not use certain words that Mr. Pawar “added to his speech”.

Dismissing the controversy over the poem, Mr. Pawar said the poet had voiced the pain of labourers who sculpt idols but they are stopped from entering the temples. “The poem depicts pain but if some people want to spread misinformation, they are free to do so,” he said.

NCP Minister Jitendra Awhad said Maharashtra has a thousand-year-long tradition of rebellion against the “manuvadi social structure”, be it the saints or the kings from the region. “The poem is simply a part of that tradition. Only those who support caste hierarchy will oppose Pawar,” he said.

Mr. Raj Thackeray’s allegations made in the last two months circle around the NCP chief’s opposition to Brahmin historian late Babasaheb Purandare and support to Maratha youth organisation Sambhaji Brigade, which is known for its stand against RSS, BJP. Mr. Pawar has clarified that no matter what Mr. Thackeray thinks, he has differences with Purandare’s “saffronisation” of Chhatrapati Shivaji Maharaj.

BJP MLC Gopichand Padalkar has been accusing Mr. Pawar of neglecting the interests of the Dhangar (shepherd) community, while another BJP leader, Sadabhau Khot, has extended his support to Marathi actor Ketaki Chitale, currently in police custody for posting an objectionable message on social media against the NCP chief.

“Political revenge is certainly one reason behind increased attacks on Pawar. But this is more of an attempt to demolish Pawar’s political credibility and humiliate him by making personal allegations against him,” said Surendra Jondhale, a political commentator and former professor of political science at Mumbai University.

He said that the attacks also reflect the low levels to which the politics of the State has stooped to. “The MVA government largely depends on Pawar at present. Ensuring an attack on him from all quarters affects the morale of the government and sends a message to Delhi that there is social unrest in Maharashtra against the MVA government,” he said.

NCP spokesperson Clyde Castro said attacking Mr. Pawar is an easy way to gain publicity. “We as a party are strong enough to answer any criticism with vested interest against our leader,” said Mr. Castro.

The political attacks have also led to social media trolls making distasteful and derogatory comments against the NCP chief. While Ms. Chitale wished him death, a youth from Nasik, Nikhil Bhamre, issued a death threat with a reference to Nathuram Godse. He was later arrested for his tweet. On Saturday, a BJP functionary was allegedly beaten by NCP workers after he abused Mr. Pawar on social media.