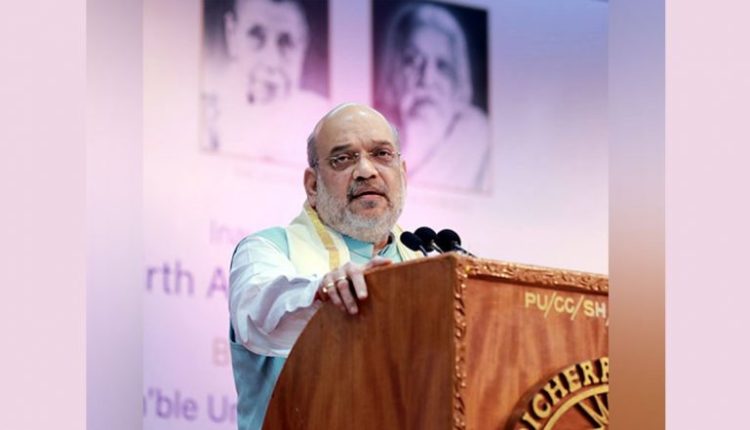 Cuttack, Aug 8:  Union Home Minister Amit Shah on Monday asserted that the BJP-led Centre works in close coordination with the Naveen Patnaik-led government for the “holistic development” of the people of Odisha.

Shah also pointed out that the state has a large number of representatives at the top echelons of the country. Amit Shah Attends Drug Trafficking and National Security Conference in Chandigarh

“Be it the governor of RBI or the President of India, Odisha has maximum number of representatives at the national level. The state is experiencing ‘acche din’ (good times) at present,” he said during a programme organised at Indoor Stadium here to mark the 75th anniversary of Odia daily ‘Prajatantra’.

Chants of ‘Amit Shah Zindabad’ filled the air as the Union minister took to the stage to deliver his speech on the occasion.

Shah said that the Centre, under the leadership of Narendra Modi, was trying to bring about “all-round development in Odisha, in close coordination with the BJD government”.

“A woman from a poor tribal village of Odisha has gone on to become the ‘Mahamahim’ (Honble President) of India. Dharmendra Pradhan from this state is the Union education minister and Ashwini Vaishnaw the railway minister.

Tudu (Bisheswar) is also a member of the council of ministers. Odisha never had such huge representation at the national level since Independence.”

Noting that Odisha has huge potential to emerge as a “state of possibilities”, Shah said, “There is a long coastline, rich mineral resources, forests and talented human resources here. I see a great future here.”

Drawing a parallel between Odisha and his native state of Gujarat, he noted that Lord Jagannath is widely worshipped in the two states.

“Odisha is located in the east, Gujarat in the west. Lord Jagannath is the one who unites people of east and west,” Shah said.

Heaping praises on Dr Haremkrushna Mahtab, the founder of ‘Prajatantra’, for his contribution to freedom struggle, the home minister said that people will also remember him for his work to promote Odia literature.

Earlier in the day, Shah offered prayers at Lingaraj temple in Bhubaneswar, and visited Netaji museum in Cuttack, where he also paid floral tributes to the revolutionary leader.