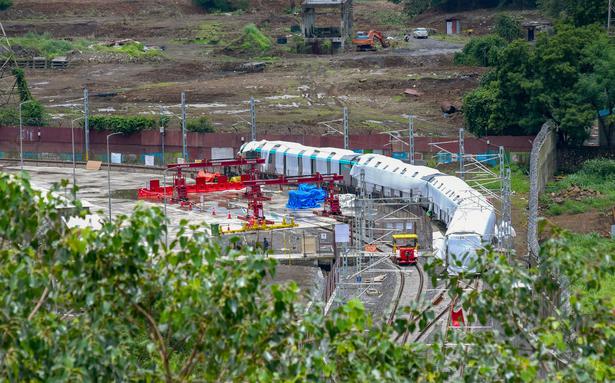 The Mumbai Metro Rail Corporation Ltd (MMRCL) on Friday told the Supreme Court no trees have been felled in the Aarey forest region to make way for a metro shed and only “weeds and bushes” have been cleared.

“Only weeds and bushes on the ground were cleared. There is an approach road. There were branches that required trimming for vehicles to pass through. No trees were cut. They have shown photographs of some other areas,” Solicitor General Tushar Mehta, for the MMRCL, maintained before a Bench led by Justice U.U. Lalit.

The petitioners however said the law officer may not have been properly briefed.

Justice Lalit, at this point, said he had assisted the Supreme Court in the capacity of an amicus curiae in forest Bench matters and offered to request the Chief Justice of India to list the Aarey case before another Bench of the court to avoid any conflict of interest.

However, Mr. Mehta said there would be no such conflict if Justice Lalit continued to hear the Aarey case. He asked the court to list the case next week for detailed arguments.

The petitioners said the authorities had returned to the Aarey site instead of the space identified for the shed at Kanjurmarg by the previous ruling regime in Maharashtra.

In October 2019, the apex court had recorded an assurance given by Maharashtra that no more trees would be cut in the Aarey forest. The court had ordered status quo on the felling.

The case was based on the suo motu cognisance taken by the court of a letter written by law student Rishav Ranjan to the Chief Justice of India about the cutting of over 2,600 trees in the Aarey.

The Bombay High Court had on October 4, 2019 refused to declare Aarey Colony a forest and declined to quash a Mumbai municipal decision to permit the cutting of the trees for the metro car shed.

“Mumbai authorities continue to kill the lungs of Mumbai i.e Aarey forest by clearing of trees near the Mithi river bank and according to news reports 1,500 trees have already been cleared by authorities,” the letter to the apex court had said in 2019.

The Aarey forest is located adjacent to the Sanjay Gandhi National Park and has five lakh trees.