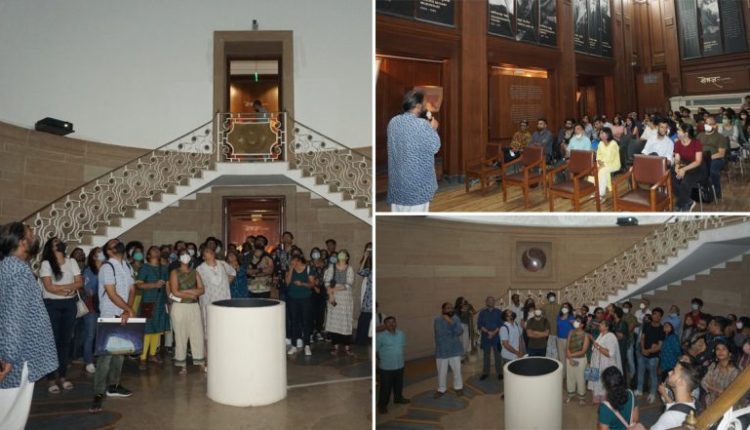 The Museum Night in the National Gallery of Modern Art has received a commendable response from the art lovers. The twilight walk in the sculpture garden and the galleries of Kshetragya with Adwait Gadanayak , Director General was delightful.

The participants have interacted with the Director General and he said that creative interactions with artists and art lovers will widen the horizons.

He also said that the Hon’ble Prime MInister of India Narendra Modi’s relentless efforts in preserving artforms and bringing back precious antiquities infuses a new life to existing art in our culture.

Later on, Satyajit Ray’s documentary on Berode Behari Mukherjee was screened for which there was presence of a captive audience.

The walkthrough in the section of Nicholas Roerich of Kshetragya (ongoing exhibition) with historian and curator Vladimir Zaitsev has enlightened the visitors with the interesting aspects of Nicholas’ relationship with the country.

People from various age groups have joined the sketching masterclass in the reimagined Amrita Shergil studio space and have done their best to present their thoughts.

The audience enjoyed visiting the gallery’s two ongoing exhibitions Hastantaran (in Transmission) and Kshetragya (The Illumined).

NGMA is privileged to hold the biggest collection of his works under one roof, several of which are on display here.

The artist spearheaded a cultural renaissance that was aligned with Gandhian ideas. The pièce de rèsistance is his rendition of Bapu, an image carved on linoleum that immortalized the Salt Satyagraha.

On display are also his legendary 1938 Haripura Posters, commissioned by the Mahatma. The significance of his contribution in the movement for India’s Independence was acknowledged when he was asked to illustrate the pages of the Constitution of India.

Their practice was a distil of their cross-cultural encounters, their colonial experience, the prevailing nationalist sentiment and the desire to respond to their own environment. Through their unparalleled virtuosity they infused new meaning into Indian art.