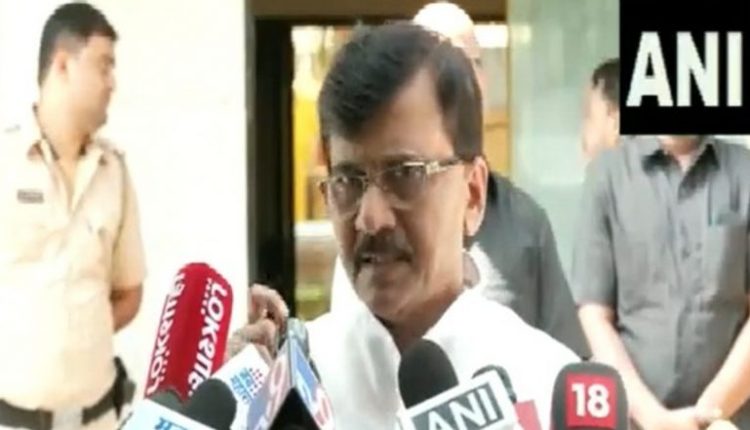 Mumbai, June 23: Amid the political crisis in the Maha Vikas Aghadi (MVA) government in Maharashtra, Shiv Sena leader Sanjay Raut on Thursday said that the Shiv Sena is ready to come out of the MVA government if the rebel MLAs are willing for it.

“MLAs should not communicate from Guwahati, they should come back to Mumbai and discuss all this with CM. We are ready to consider exiting out of MVA if this is the will of all MLAs, but for that, they have to come here and discuss it with the Chief Minister Uddhav Thackeray, said Raut. Also Read | Maharashtra Political Crisis: ‘CM Uddhav Thackeray Used To Be in Matoshree’, Says Shiv Sena MLA Sanjay Shirsat; Eknath Shinde Says All MLAs Shared the Same Views.

Rebel Shiv Sena leader Eknath Shinde on Thursday tweeted a letter addressed to Chief Minister Uddhav Thackeray, and captioned it “This is the sentiment of MLAs”. According to the letter, the Shiv Sena leaders don’t have access to the chief minister’s residence.

“CM never used to be in the Secretariat, instead, he used to be in Matoshree (Thackeray residence). We used to call people around the CM but they never used to attend our calls. We were fed up with all these things and persuaded Eknath Shinde to take this step,” the MLA wrote in the letter.

“It was nice to see people are being allowed inside your Bungalow but these doors were closed for the elected MLAs. We came with our problems in our constituencies and other work, but were made to remain outside for hours together. On the other hand,Eknath Shinde was accessible. We stood at the gates of Varsha for hours. It was only Eknath Shinde who supported us,” the letter further added.

“People around the CM used to decide if we can meet him or not. We felt we were insulted. CM never used to be in the Secretariat, instead, he used to be in Matoshree (Thackeray residence). We used to call people around the CM but they never used to attend our calls. We were fed up with all these things and persuaded Eknath Shinde to take this step.”

Notably, a total of 42 Maharashtra MLAs are present with Shiv Sena leader Eknath Shinde while only 13 are with Maharashtra CM Uddhav Thackeray and Shiv Sena.

Of the 42 rebel MLAs, 34 MLAs are from Shiv Sena and eight are Independent MLAs. Meanwhile, Shiv Sena MLA Kailash Patil claimed that they were trapped and taken to Surat.

“We were trapped and taken to Surat, I walked a kilometre to run away from there. We will not ditch Shiv Sena which has made us MLA,” he said.

Maharashtra Minister and Nationalist Congress Party (NCP) leader Jayant Patil on Thursday made it categorically clear that if the Shiv Sena-led Maha Vikas Aghadi (MVA) government in Maharashtra falls the NCP will prefer to sit in Opposition.

His statement comes after the NCP meeting was held at party chief Sharad Pawar’s residence today. Amid political instability in the ruling Maha Vikas Aghadi (MVA) government in Maharashtra, the NCP leader said Sharad Pawar has asked party leaders to do everything that needs to be done to ensure that the government remains.

Meanwhile, the poster of Shiv Sen MLA Sada Sarvankar, who is currently camping in Guwahati with rebel party leader Eknath Shinde, is smeared with ink, word ‘traitor’ is written on the poster in his constituency in the city.

On the other hand, BJP had put up a poster, which reads “Goddess Mauli, may your blessings continue to be upon us and Devendra ji come to offer prayers to you in Pandharpur, after becoming the CM.”

Moreover, a resolution passed by the Shiv Sena Legislature Party carrying signatures of 34 MLAs that rebel leader Eknath Shinde continues to be the leader, has been sent to the state Governor Bhagat Singh Koshyari.

Additionally, Maharashtra Chief Minister Uddhav Thackeray left his official residence ‘Varsha’ along with his family members on Wednesday hours after he expressed his readiness to step down if rebel MLAs returned to Mumbai and made such a demand.

Shiv Sena workers and supporters showered petals and raised slogans in support of Thackeray when he left with his family from his official residence ‘Versha Bungalow’, last night amid political instability in the state.

Following the political crisis, Shiv Sena had removed Eknath Shinde as the party’s legislative party leader. However, the rebels have hit back with the resolution.

The resolution said that Shiv Sena’s ideology has been compromised in the past two years. They also expressed their dissatisfaction with “corruption in government,” referring to Anil Deshmukh and Nawab Malik, who are currently in jail.

However, the rebel Shiv Sena MLAs have said that there is enormous discontent amongst the party workers for forming the government with NCP and Indian National Congress on account of different ideologies.