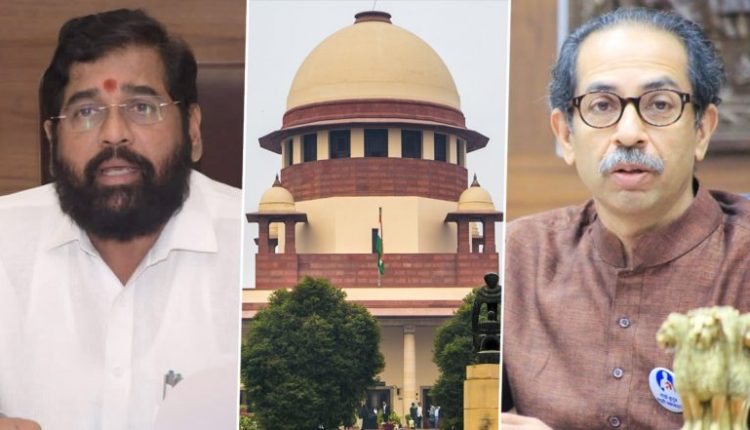 New Delhi, June 27: The Supreme Court on Monday asked the Eknath Shinde’s faction, ‘why they did not move the Bombay High Court’ to which they responded that ‘their lives were under threat and atmosphere was not conducive to pursue legal remedies in Mumbai.

Kaul cited threats to the lives of the rebel Shiv Sena MLAs and their families, which made the atmosphere non-conducive to pursue cases in Mumbai.

Kaul said the petitioners said that the Deputy Speaker cannot proceed with the disqualification proceedings against them, when a resolution seeking his removal was pending. He cited the decision of the apex court in the “Nabam Rebia” case (2016).

Kaul added that a minority of the legislative party was subverting the state machinery, and their houses were being attacked. Kaul said they said, “bodies will arrive and we will be slaughtered like bulls…”

The bench said there were two things — first the alleged threats to the lives of the MLAs, which the court has no means to verify, and the second issue the lack of time given to the MLAs to respond to the disqualification notice.

The bench noted that the important overarching issue was that the Speaker or Deputy Speaker could not continue till his continuance was under doubt.

Kaul reiterated how a Deputy Speaker could proceed with the issue when his removal was in question.

The hearing was in progress in the matter.

The top court was hearing petitions by Eknath Shinde and the rebel MLAs of Shiv Sena challenging the disqualification notices issued by the Maharashtra Deputy Speaker to them and also the appointment of Ajay Choudhari as the Shiv Sena Legislature Party leader.

The plea said the petitioner was aggrieved by the notice/summon dated June 25, which was grossly illegal, unconstitutional and in utter disregard of the judgment of this court in the matter of Nabam Rebia & Bamang Felix Vs Deputy Speaker, Arunachal Pradesh Legislative Assembly in (2016). “That the seat of Speaker is vacant since Nana Patole resigned from office in February 2021. Thus, there is no authority who can adjudicate upon the disqualification petition under which the impugned notice has been issued to the petitioner,” it added.

(The above story first appeared on Today News 24 on Jun 27, 2022 03:29 PM IST. For more news and updates on politics, world, sports, entertainment and lifestyle, log on to our website todaynews24.top).