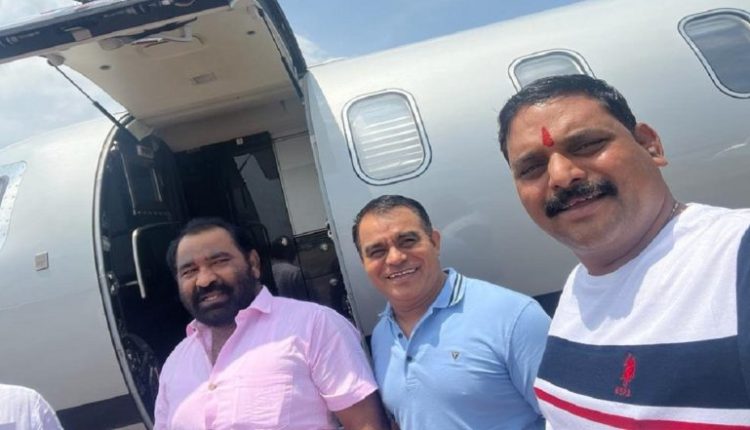 Mumbai, June 23: The Eknath Shinde-led rebel faction of the Shiv Sena on Thursday released photographs of Sena MLA Nitin Deshmukh who returned to Maharashtra a day ago and alleged that he was forcibly taken to Surat in Gujarat.

Addressing a press conference here, Deshmukh alleged that he was taken to Surat and when he realised the conspiracy against the Maha Vikas Aghadi government he tried to run away but was caught by Surat Police. Maharashtra Political Crisis: ‘We Want Justice for Uddhav Thackeray,’ Says West Bengal CM Mamata Banerjee.

“We were forcibly taken to Surat, I tried to run away but was caught by Surat police. Despite having no complications, doctors told me that I had a heart attack. 300-350 police personnel were keeping an eye on us,” he alleged.

“Before me, MLA Prakash Abitkar tried to get away from them but he could not. We got to know about the conspiracy against the MVA government as soon as we reached Surat hotel,” Deshmukh said. Soon after, the Eknath Shinde camp released pictures of Nitin Deshmukh with other rebel MLAs.

Notably, a total of 42 Maharashtra MLAs are present with Shinde while only 13 are with Maharashtra CM Uddhav Thackeray and Shiv Sena. Shiv Sena leader Sanjay Raut said earlier today that his party is ready to exit the Maha Vikas Aghadi government if the rebel MLAs are willing. After this, Congress has called a meeting of its leaders today.

“MLAs should not communicate from Guwahati, they should come back to Mumbai and discuss all this with CM. We are ready to consider exiting out of MVA if this is the will of all MLAs, but for that, they have to come here and discuss it with the Chief Minister Uddhav Thackeray, ” Raut said.

According to sources, Congress is unhappy with the statement of Shiv Sena leader and has convened a meeting at the Sahyadri guest house in this regard. Senior Congress leaders including HK Patil, Balasaheb Thorat, Nana Patole and Ashok Chavan are participating in the meeting.

Speaking to ANI, Maharashtra Congress chief Nana Patole said that the party is with Shiv Sena to stop the BJP from coming to power in the state. “We’re with them (Shiv Sena) to stop BJP from coming to power. This game is happening due to ED…Congress is ready for the floor test. We’re with MVA and will remain. If they(Shiv Sena) want to form an alliance with anyone, we don’t have a problem,” he said.

NCP leader Jayant Patil tweeted, “Maharashtra Vikas Aghadi is a government established for the development and welfare of Maharashtra. We will stand firmly with Uddhavji Thackeray till the end.”