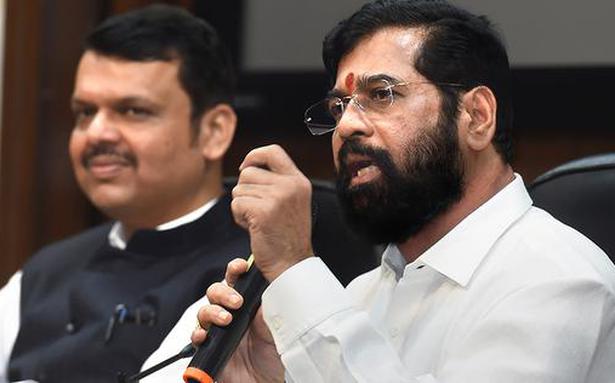 CM Shinde and Deputy CM Fadnavis had been functioning as a two-member cabinet since then, inviting criticism from opposition leaders

CM Shinde and Deputy CM Fadnavis had been functioning as a two-member cabinet since then, inviting criticism from opposition leaders

After much suspense lasting for 40 days, the long-pending expansion of the new Maharashtra Cabinet of the Eknath Shinde-Devendra Fadnavis government is set to take place on Tuesday at 11 a.m., said government sources on August 8, 2022.

The administration also issued a notice announcing that the long-delayed monsoon session of the State legislature would begin on Wednesday and continue till August 18.

The swearing-in ceremony of the new Ministers would be held in the Raj Bhavan, said officials.

Ever since Mr. Shinde and Mr. Fadnavis took power on June 30 by forming the new Shiv Sena (Shinde camp)-BJP government, the expansion of the State Cabinet has been pending, drawing criticism from the Uddhav Thackeray faction of the Shiv Sena and other Opposition parties, including the Nationalist Congress Party (NCP).

The Opposition has been censuring Mr. Shinde and Mr. Fadnavis for running a ‘two-man jumbo Cabinet’ of their own.

By all accounts, the expansion will take place in two phases. Sources say that anywhere between 10-15 Ministers are likely to be sworn in the first phase.

It is unclear whether an equal number of MLAs from the BJP (which is the single-largest party in the State Legislature) and the Sena faction led by Mr. Shinde will be sworn in.

BJP heavyweights such as Radhakrishna Vikhe-Patil, Sudhir Mungantiwar, Pravin Darekar and Chandrakant Patil may be inducted in the first round while Sena camp MLAs such as Dada Bhuse and Gulabrao Patil could make it in the first phase, said sources.

On Friday, the general administration department had promulgated an order to provide for the granting of quasi-judicial powers to bureaucrats. With the Cabinet not yet in place, sources said the powers were entrusted to bureaucrats in order to ensure speedy problem resolution at the ground level.

The Opposition has also alleged that the frequent visits of Mr. Shinde and Mr. Fadnavis to Delhi to meet the BJP high command to presumably iron out the details of the portfolio allocation were responsible for the delay in Cabinet expansion.

The allocation exercise is likely to be contentious, with the BJP reportedly keen on controlling the plum departments such as Home, Finance and Water Resources among others. It is believed that Mr. Fadnavis is likely to keep Home while Mr. Shinde has been gunning for the Revenue Department.