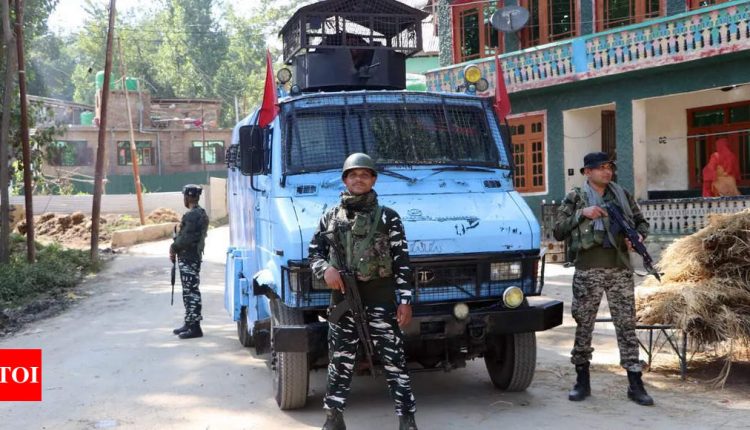 0
Share
SRINAGAR: Three days ahead of the Amarnath Yatra, two local Lashkar-e-Taiba terrorists were shot dead in an anti-terror operation in south Kashmir’s Kulgam district on Monday. The encounter assumes significance as the spot of the firefight was very close to the highway, which is the route of the Yatra set to begin on June 30, IGP (Kashmir Range) Vijay Kumar said, adding that the LeT/TRF has been issuing threats to the annual pilgrimage.
The IGP lauded the joint team of security forces for taking extreme care in ensuring zero collateral damage by evacuating civilians trapped around the encounter site to safer places.
The slain terrorists were identified as Zubair Ahmad Mir and Idrees Ahmad Dar, both from Kulgam. “Zubair had been active since August 2021 and was trying to revive terrorism in the region by radicalising gullible youth — including Idrees Ahmad — into picking up arms and recruiting them for the outfit,” said the IGP. “As per police records, both Zubair and Idrees were categorised terrorists involved in several terror crimes including attacks on security personnel and civilian atrocities,” he added.
“Acting on specific information generated by police about the presence of terrorists in village Nowpora-Kherpora, Trubji area of Kulgam, a cordon-and-search operation was launched by a joint team of the Army’s 1RR, CRPF and police. As the security forces advanced toward a suspected hideout, holed-up terrorists opened fire at the search party, triggering an encounter in which the Lashkar duo was killed,” said a police spokesperson. Arms and ammunition were seized from the spot of the encounter.
0
Share