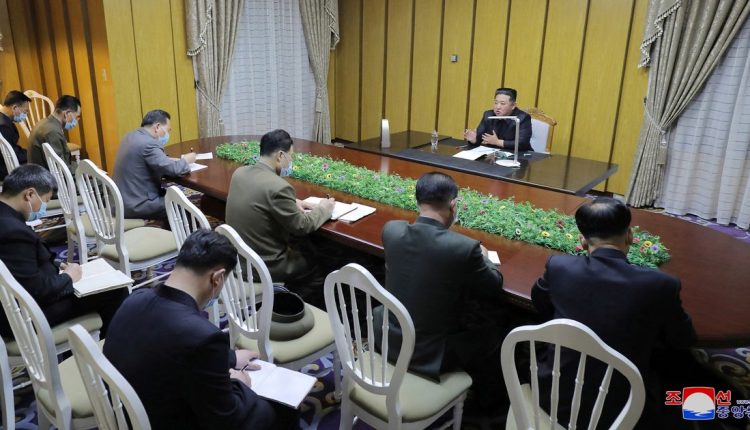 North Korean leader Kim Jong-un has called the Covid outbreak, that has now seen more than 280,000 people treated with symptoms, the “greatest upheaval” to ever hit the country

North Korea is facing its “greatest upheaval,” said Kim Jong-un, as it battles a Covid outbreak with over 280,000 people now being treated with symptoms.

The secretive state reported 21 new deaths on Friday among people with fevers, the state news agency reported, as the country battles its first official Covid outbreak.

About 280,810 people were being treated and 27 people have died since a fever of unidentified origins started to be reported in the country since late April, KCNA news agency said.

State media did not say whether the new deaths were due to Covid after on Friday having said one death had been confirmed to be due to the Omicron variant.

The reports were made at a ruling Workers’ Party meeting early on Saturday that was attended by leader Kim, who said the outbreak was a great disaster to fall on the country since its foundation but one that can be overcome, KCNA said.

The National Emergency Response Command reported to a meeting chaired by Kim where measures were discussed to slow the spread of the virus, reported Yonhap News, based in South Korea.

The distribution of medicines and quarantine were discussed in detail, reported North Korean state media.

“The spread of a malignant epidemic can be said to be the greatest upheaval since the founding of the country,” said Kim.

But the leader added that Covid could be overcome with strong organisation and controls.

Kim has blamed the outbreak in failures in the quarantine plan
(

And he emphasised the country could cope without external help, suggesting it wouldn’t accept support that has been offered from South Korea.

Kim continued: “The current situation is not an out-of-control transmission between regions, but transmission within the containment area and the area concerned.”

He also threw the blame for the outbreak on the “incompetence and irresponsibility” of the country’s quarantine strategy.

But the leader did offer to do his part by donating medical supplies, which had been kept in his household, to be used by families that are experiencing particular hardship, said state media.

Kim is believed to be looking at China as an example on how North Korea needs to move forward.

KCNA VIA KNS/AFP via Getty Image)

He said: “It is also important to study the quarantine policies and achievements of advanced countries.”

Given North Korea’s limited testing capabilities, the numbers released probably represent a small fraction of total infections, which could lead to thousands of deaths in one of only two countries without a Covid vaccination campaign, according to experts.

North Korea has been testing about 1,400 people a week, according to Harvard Medical School’s Kee Park who has worked on health care projects in the country, not nearly enough to survey the hundreds of thousands of people with symptoms.

Twitter CEO Parag Agrawal Says, ‘We Need To Be Prepared for All Scenarios and Always Do What’s Right for Twitter’