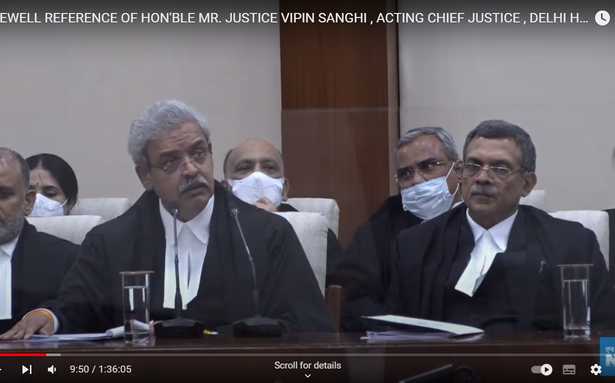 After spending 5,872 days as a judge of the Delhi High Court and having delivered 2,210 judgments, Justice Vipin Sanghi is headed for Uttarakhand High Court as its Chief Justice.

In the course of his judicial career spanning 16 years, Justice Sanghi has delivered several landmark judgments which deserves special mention.

Justice Sanghi will, however, be remembered most for pushing himself and fellow judges beyond their call of duty to listen to a helpless public who had turned to the judiciary as everything else failed during the deadly second wave of the COVID-19.

From lengthy court proceedings on Saturdays and Sundays to urgent late-night hearings, the Bench headed by Justice Sanghi brought in a sense of urgency to the collective effort being made to tackle the second wave that hit the capital last year.

‘No life should be lost due to lack of oxygen’, a bottom-line set by Justice Sanghi during the height of the second wave also helped save countless lives in the Capital.

“The Bench headed by Justice Sanghi played an instrumental role in ensuring that the administration and courts were accessible to meet the grievances of the people of Delhi in real-time during the second wave of Covid-19 pandemic,” Justice Siddharth Mridul said during his farewell function on Monday.

Justice Sanghi made sure that grievances of the people of Delhi regarding oxygen, hospital beds, vaccines and more were met urgently, Justice Mridul said.

At his farewell function, Justice Sanghi shared fond memories of his years at both the bar and later at the Bench. “Judging is not an easy task and it requires time. The general opinion of the member of public that judges have it too easy because they have five working days a week and also summer and other breaks is a result of their ignorance of the amount of workload that judges carry,” Justice Sanghi said.

“Practically, every vacation or break that I have had ever since I became a judge has been spent in substantial part in writing or completing judgments. This explains why there is a flurry of pronouncements soon after the reopening of the courts after the breaks,” Justice Sanghi stressed.

“I will not be exaggerating if I say that the typical working day of a judge is 12 hours or more. Considering the long hearings that we hold in many complex matters, many reserved judgments take several days to painstakingly pen down after going through several drafts,” he added.

Justice Sanghi also reminded that the disposal of the courts as a whole greatly depends on the working strength of the court. “Low judge strength not only put strain on the judicial system, but results in putting the serving judges through tremendous amount of work pressure,” he explained.

“The entire burden which ideally should be shared by the full complement of judges falls on the reduced numbers in office, that slows the disposals as the boards of all the judges get chocked. It also has an impact on the quality of judgments that the judges deliver as there is dearth of time to carry out research and work on reserved judgments,” Justice Sanghi said while stressing on filling up the judges’ vacancies in High Courts.

Currently, Delhi High Court has 46 judges against a sanctioned strength of 60.

“It actually robs the judges of the joy of judging. The process of appointment over the years has become more time consuming and more uncertain. This has dissuaded many truly meritoriously senior advocates and other advocates from giving their consent to be considered by the Collegium of the High Court for recommending their name for judgeship,” Justice Sanghi said.

This aspect needs to be urgently addressed if we wish to attract the best talent to the Bench, he added.

In December last year, a Bench headed by Justice Sanghi ordered manufacturers to disclose full and complete list of all ingredients that goes into the making of any food article. The use of non-vegetarian ingredients, even in miniscule amount, in food articles would render them non-vegetarian, which would offend the religious and cultural sentiments of strict vegetarians, Justice Sanghi observed.

In February 2018, another Bench headed by Justice Sanghi upheld the life imprisonment awarded to five convicts in the 2010 Dhaula Kuan gangrape case in which a 30-year-old BPO executive from the North-east was raped by five men inside a moving vehicle.

In August 2018, a Bench headed by Justice Sanghi called for bringing in digital technology such as video recording and cloud storage in the process of witness statements recording by police saying it would “lend immense credibility to their performance”. Delhi police records proceedings or statements on paper.