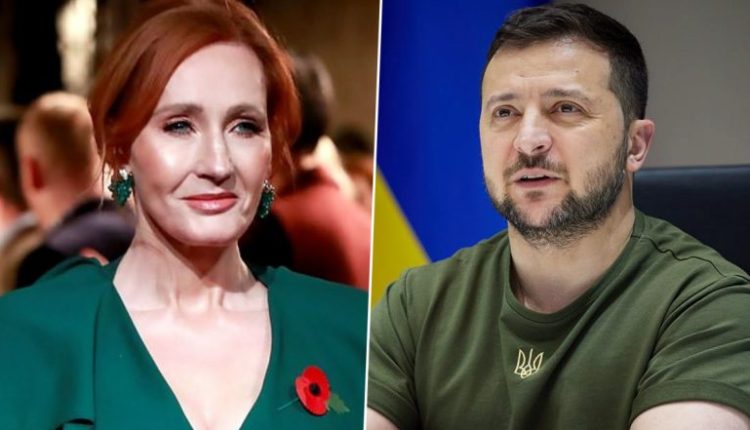 Harry Potter author JK Rowling has become the latest victim of a hoax by Russian comedians Vovan and Lexus who tricked the former into believing she was having a video call with the president of Ukraine, Volodymyr Zelenskyy. The prank did not go down well with Rowling. Her spokesperson slammed Vovan and Lexus, describing the hoax as “distasteful,” The Hollywood Reporter reported. JK Rowling Falls Victim to Hoax, Author Led To Believe She Is Talking to Ukranian President Volodymyr Zelenskyy (Watch Viral Video).

“JK Rowling was approached to talk about her extensive charitable work in Ukraine, supporting children and families who have been affected by the current conflict in the region. The video, which has been edited, is a distorted representation of the conversation,” the spokesperson said. In a 12-minute video of the prank, Rowling was told by the fake Zelenskyy that Harry Potter’s famous forehead scare resembles the “Z” symbol that the Russian military has used on tanks and other weapons. Comedian Jon Stewart Refutes the Viral News of Accusing JK Rowling of Anti-Semitism.

The pranksters asked Rowling if she would switch Harry’s scar to a more pro-Ukraine symbol, to which the author answered, “I will look into that, might be good for me to do something with that myself on social media because I think that will get into the newspapers.” According to Variety, the pranksters also told Rowling that the Ukraine military would begin writing “Avada Kedavra” on its missiles, a reference to the killing curse in the “Harry Potter” franchise. Prior to Rowling, the Russian comedians have pulled pranks on Elton John, Prince Harry, Billie Eilish, Kamala Harris, Bernie Sanders and George W. Bush in the past.

Perth paedophile back behind bars 48 after being released from prison