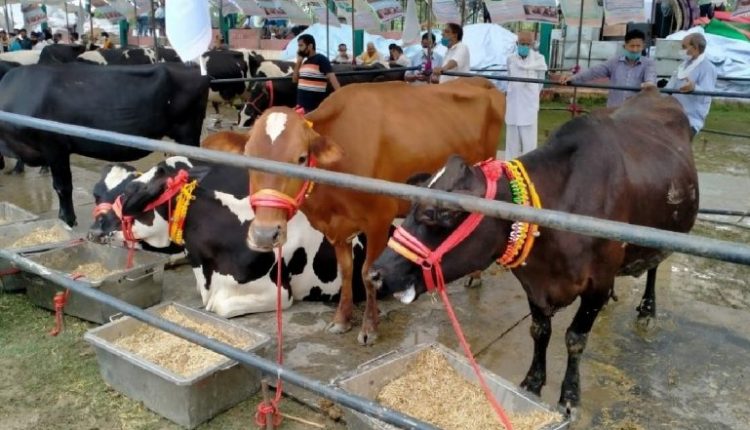 Kathua, December 7: To boost the growth of animal husbandry activities in the Union Territory, the Department of Animal and Sheep Husbandry organised a ‘Vishal Pashudhan Vyapar Mela’ in the RP Check Post, near Lakhanpur area of Kathua district. With this effort, the government to achieve self-sufficiency in milk production.

Speaking to reporters on Sunday in this regard, Principal Secretary of Animal and Sheep Husbandry, Navin Kumar Choudhary said, “This ‘mela’ is a great initiative to boost the dairy farming in the Union territory and boost the relationship between the buyer and the seller.”

“This step will help Jammu and Kashmir in a big way to achieve the target of becoming self-sufficient in milk production,” he added. Secretary of Cooperatives Department, Yasha Mudgal was the guest of honour on the occasion and inaugurated the mela with Choudhary. Weather Forecast: Jammu & Kashmir, Himachal Pradesh & Others Likely to Receive Rainfall, Snowfall on December 8 & 9.

“Just like Punjab and other states, this mela is being organised here. Animals that help in dairy farming are here. I hope that via this project, the Union Territory gets sufficient in milk production. I ham happy that the Jammu and Kashmir government has made such an arrangement,” Mohammad Sadiq, a buyer said.

Another local present at the venue, KK Khajuria said, “This initiative by the government will help in saving time and money of the farmers who otherwise have to venture out in other states to get quality livestock.”

The mela was organised by the Department of Animal and Sheep Husbandry is first of its kind where sale and purchase of multiple breeds of cows, buffaloes, sheep, goat is being encouraged.