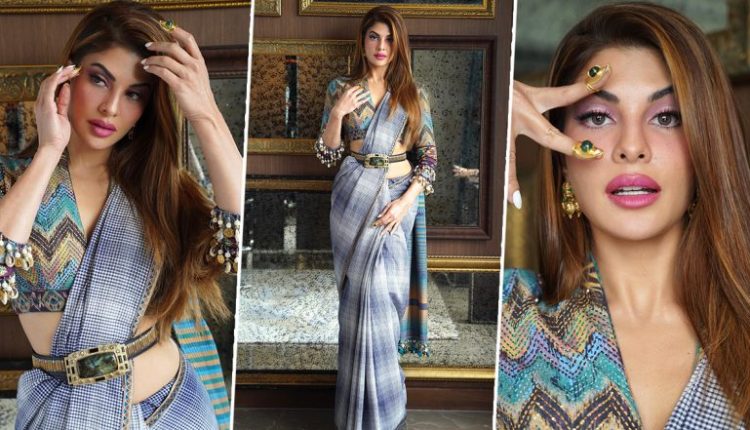 Bollywood actor Jacqueline Fernandez on Wednesday shared a series of pictures on her social media account. Taking to her Instagram handle, Jacqueline shared some ethereal pictures and left fans gaga over her look. The actor was seen dressed in blue-purple hued saree which she accessoried with a statement belt to increase the chic quotient of her outfit. Jacqueline Fernandez Flaunts Her Love for Victorian Fashion in This White Lace Saree (View Pics).

She sported a deep neck blouse with embellished hanging on sleeves. In this picture, Jacqueline seen showing off her beautiful nail rings. For makeup, she opted for bold makeup with bright pink eyes and pink lips. She left her tresses open. Jacqueline in every pose and frame looked radiant and ethereal in her outfit.

Sharing the pictures, she wrote, “Rakkamma ready!!#rararakkamma #VikrantRona” . Rakkamma is the character she is playing in her upcoming movie Vikrant Rona. Earlier the actor took to her Instagram handle and shared the first look image from her Kannada debut film. Introducing fans to her character, in the caption, she wrote, “‘What Rakkamma doesn’t know, doesn’t exist’ Super happy to introduce my character #GadangRakkamma from #VikrantRona #JacquelineVikrantRonaLook #JacquelineAsRakkamma.” Jacqueline Fernandez Oozes Glamour in Stylish Outfits on Harper’s Bazaar Magazine Covers, See Photos.

Vikrant Rona written and directed by Anup Bhandari. A 3D fantasy action-adventure of epic proportions, the teaser of the film introduces Kichcha Sudeepa as Vikrant Rona, the Lord of the Dark who strikes fear into the hearts of his enemies. The nearly two-minute-long teaser gives a glimpse into the massive cinematic experience that audiences can expect from the film.

Vikrant Rona starring Sudeepa, Nirup Bhandari and Neetha Ashok, is presented by Zee Studios, produced by Jack Manjunath under his production Shalini Artss, co-produced by Alankar Pandian of Invenio Origins and is directed by Anup Bhandari.

The film will be released in five languages including Kannada, Tamil, Telugu, Malayalam and Hindi. The film will hit theatres on July 28 this year. On the Bollywood front, Jacqueline has her kitty full with some interesting projects like, Cirkus, Bhoot Police, Kick 2, Ram Setu, Attack and Bachchan Pandey.