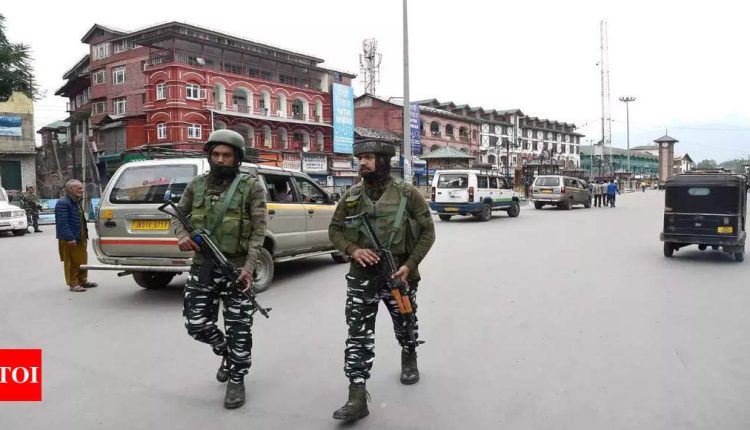 0
Share
SRINAGAR: A policeman was injured after terrorists fired at a joint naka party of the police and Central Reserve Police Force (CRPF) in the Bijbehara area of Anantnag in Jammu and Kashmir, informed the Jammu and Kashmir police on Friday.
The injured policeman was immediately evacuated to a hospital for treatment.
Following this, the area was cordoned off and a search is in progress.
“Terrorists fired upon joint naka party of police/CRPF in Bijbehara area of Anantnag. In this terror incident, one police personnel got injured who was immediately evacuated to hospital for treatment. Area cordoned off. Search in progress,” tweeted the Jammu and Kashmir police.
Earlier, three Indian Army personnel on Thursday succumbed to injuries received while neutralising two terrorists carrying out a suicide bomb attack in Jammu and Kashmir’s Rajouri.
Subedar Rajendra Prasad, Rifleman Manoj Kumar and Rifleman Lakshmanan D made the supreme sacrifice for the country during the operation Thursday morning.
The Army managed to foil the suicide bomb attack on its base here and killed both the terrorists.
A labourer from Bihar was fired upon by terrorists at Soadnara Sumbal in Jammu and Kashmir’s Bandipora district on the intervening night of Thursday and Friday, following which he succumbed to his injuries, police said.
The deceased labourer was identified as Mohd Amrez, hailing from Bihar’s Madhepura.
Soon after being shot, he was shifted to the hospital for treatment where he died.
0
Share