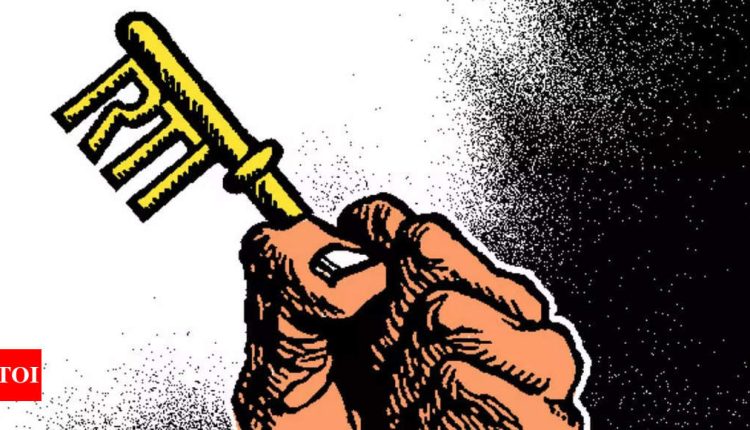 0
Share
AHMEDABAD: Over the past 18 months, 10 people in Gujarat have been banned for life from filing RTI (right to information) queries on certain matters. Among its reasons for imposing the ban, the Gujarat Information Commission (GIC) cited “filing multiple queries”, “being cantankerous” and “using the RTI Act to harass government officials”.
In a first in its history, the GIC imposed a fine of Rs 5,000 on applicants, Hitesh Patel and his wife from Petlad town, for filing 13 RTI queries related to their residential society. “The GIC withdraws the citizen’s right to make submissions before the commission,” it said.
In all the 10 cases analysed by Mahiti Adhikar Gujarat Pahel, an NGO that runs an RTI helpline and studies RTI applications and responses, information commissioners have instructed officials concerned that no information be given on the issues at hand.

On one Guj teacher, RTI ban for seeking pay details
India’s first chief information commissioner Wajahat Habibullah told TOI: “These orders are not only disputable but also totally illegal and could be challenged by moving the Gujarat high court.”
A schoolteacher from Pethapur in Gandhinagar, Amita Mishra, was banned after she sought a copy of her service book and salary details. Information commissioner K M Adhvaryu ordered the district education office and Sarva Vidyalaya Kadi to never entertain her applications. The school authorities had complained that she does not pay the required Rs 2 per page RTI fee and asks the same set of questions.
Sattar Majid Khalifa, a school employee from Kasba in Modasa town, was banned after he asked questions about the action his institution had taken against him. Adhvaryu withdrew Khalifa’s right to appeal to the commission on that subject. He observed that Khalifa was “trying to take revenge on the school by filing RTI queries”. The ruling also noted that Khalifa “made allegations against the PIO (public information officer), the appellate authority (of the education department) and even the commission during a virtual hearing”. Information commissioner Dilip Thaker banned Chintan Makwana of Bhavnagar from seeking any information about Bhavnagar’s chief district health office, including CCTV footage. Makwana’s wife is a class-3 employee of the health department in Jesar and wanted information on criteria pertaining to allotment of government residential quarters to the department’s employees following a dispute over the issue. Makwana’s wife and his mother-in-law were banned for five years with an observation that her RTI was “mala fide” and “revengeful”.
Pankti Jog of MAGP says, “A detailed analysis of these 10 orders reveal that Gujarat’s information commissioners have relied on paras from a handful of court orders – like the 2008 Delhi HC order pertaining to ND Qureshi vs Union of India; the Supreme Court case of CBSE vs Aditya Bandopadhyay of 2011; a CIC case involving HK Bansal vs DoT; and the 2011 case of ICAI vs Shaunak Satya – without considering the context of these orders and using them to deny information to citizens.”