If Ashok Gehlot Resigns, Who Will Be Next Rajasthan CM? Sachin Pilot Front Runner, CP Joshi and Govind Dotasra Also in Race 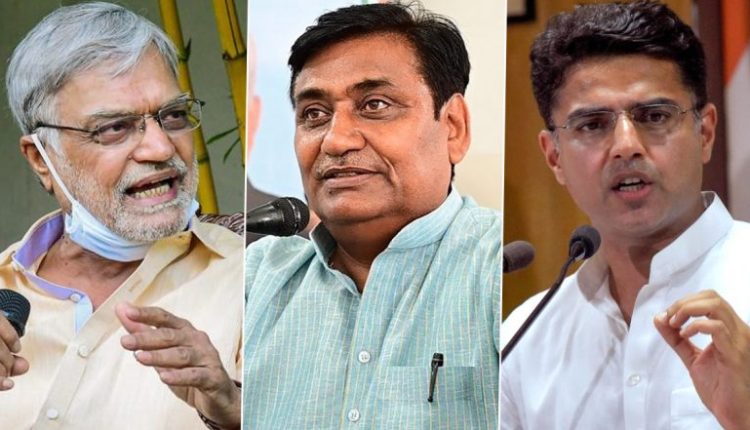 Jaipur, September 23: After Rajasthan Chief Minister Ashok Gehlot made it clear that he will be contesting the election for Congress president post and step down as state CM if he wins,  questions are being raised as to who will be the CM in his place in the state.

The principle of one person, one post is applicable in the Congress party and in such a situation, if Gehlot does become the National President of the INC, he will have to resign from the post of Rajasthan Chief Minister. Rahul Gandhi Says Congress Will Adhere to ‘One Man One Post’; Big Hint for Ashok Gehlot, Relief for Sachin Pilot

While Ashok Gehlot has said that the sentiments of MLAs will be kept in mind while the high command chooses the next Chief Minister, CP Joshi, Govind Dostara and Sachin Pilot seem to be the probable chief ministerial candidates for Rajasthan. Sachin Pilot To Be New Rajasthan CM? Speculations Rife As Ashok Gehlot Decides To Contest Congress President Election

CP Joshi is currently the speaker in the state assembly. Born in Rajasthan’s Kunwaria in Rajsamand district, Joshi holds a doctorate in psychology and a law degree. He worked as a lecturer when former chief minister of Rajasthan Mohanlal Sukhadia discovered him and hired him for his election campaign. Joshi was president of the Rajasthan Congress in 2008. He has been a former Union Minister and is one of the senior leaders of the party. CP Joshi’s role was said to be instrumental in getting CM Gehlot’s son and Congress leader Vaibhav Gehlot as the President of Rajasthan Cricket Association. There is a high chance that Ashok Gehlot can propose the name of CP Joshi in his place as conceding space to Pilot in Rajasthan despite becoming Congress president is unthinkable as it would be perceived as diminished clout in the party apparatus.

Son of late politician Rajesh Pilot and former Deputy Chief Minister of Rajasthan Pilot has said that he would accept whatever role the party leadership decides for him. For the past few months, Pilot’s supporters have been demanding from the high command that the dynamic and young Gujjar leader be made the chief minister. Sachin Pilot was removed as deputy chief minister of Rajasthan and state Congress chief in July 2020. This came after a reported tiff with Ashok Gehlot. In the 2018 Assembly polls, when the Congress managed to hit the halfway mark, bagging 100 seats, it was widely attributed to Pilot’s leadership. However, the AICC leadership decided to hand over the CM mantle to Gehlot, in a move that upset Pilot, who was appointed as the Deputy CM. Pilot is now banking on Rahul Gandhi to reward his patience.

Govind Singh Dotasra is the current president of Rajasthan Pradesh Congress Committee. He was appointed Minister of State for primary and secondary education, Tourism and Devasthan in 2018 Government of Rajasthan. However, he resigned from his ministry post respecting Party’s one man one post policy on 20th November 2021. After joining the party in 2005 while working as a lawyer, Dotasara won his first assembly elections in 2008 from the Lakshmangarh constituency. Ever since, he has held the seat for three consecutive times. Though Dotasra has denied the he is among the contenders to become a CM but Ashok Gehlot will most likely back him or CP Joshi for the top post.

The race for the next Rajasthan CM is going to be a fascinating contest with Rahul Gandhi most likely to back Sachin Pilot as the next CM and Ashok Gehlot not willing to go without a fight as he would want to see someone who is loyal to him as CM in Rajasthan and deny Pilot, who has been eyeing the post patiently after a failed bid in 2020, a chance to succeed him.

(The above story first appeared on Today News 24 on Sep 23, 2022 04:55 PM IST. For more news and updates on politics, world, sports, entertainment and lifestyle, log on to our website todaynews24.top).