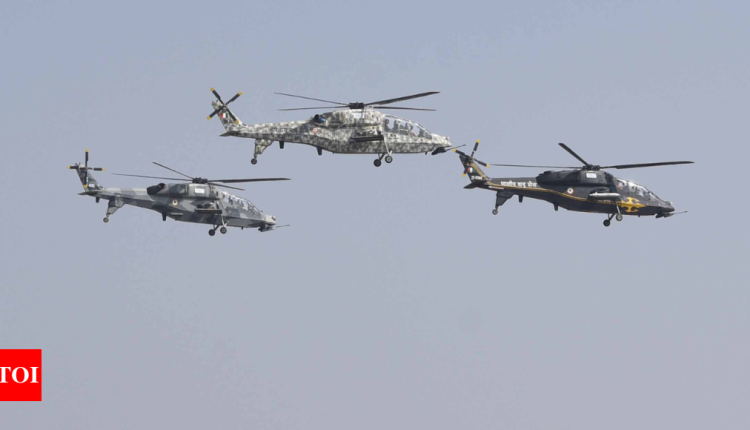 0
Share
NEW DELHI: The IAF will induct the first indigenous light combat helicopter (LCH), which is capable of offensive operations in the Siachen Glacier-Saltoro Ridge region and eastern Ladakh, at its Jodhpur airbase in the presence of defence minister Rajnath Singh on October 3.
The phased induction of these 5. 8-tonne choppers, which are armed with 20mm turret guns, 70mm rocket systems and air-to-air missiles, will boost IAF’s capabilities against enemy infantry troops, tanks, bunkers and UAVs (unmanned aerial vehicles) in high-altitude areas as well as in other terrains.
Two LCHs, incidentally, were flight-evaluated in eastern Ladakh in 2020 amidst the still-continuing military confrontation with China there. “It was during the Kargil conflict with Pakistan in 1999 that the need for such an indigenously-developed armed helicopter with high-altitude capability was acutely felt for the first time,” an officer said.
IAF and Army require an estimated 160 LCHs in the coming years. The Cabinet Committee on Security had cleared the first contract for 15 LCHs(10 IAF and 5 Army), at an overall cost of Rs 3,887 crore, along with infrastructure sanctions worth Rs 377 crore, in March.
Defence PSU Hindustan Aeronautics has produced eight of the 15 choppers till now, of which four have been “accepted” by IAF. These LCHs have 45% indigenous content by value, which will progressively increase to more than 55% for the next version, an official said. The LCH is touted as the only attack helicopter in its weight class in the world which can land and take-off at an altitude of 5,000-metre or 16,400-feet with a considerable load of weapons and fuel.
Powered by two Shakti engines, developed with the French Safran Group, the highly-agile and manoeuvrable LCHs have advanced features like helmet-mounted sights, glass cockpits and composite airframes, and are capable of operating around-the-clock in all-weather conditions. “The LCHs also have enhanced survivability through lightweight armour panels against 7.62mm and 12.7mm rounds, self-sealing fuel tanks, damage-tolerant main rotor blades, bullet-proof windshields and a low frontal radar cross-section,” the official said.
“Moreover, the LCHs have built-in crashworthiness of landing gear, bottom structure, crew seats and fuel tanks,” he added.
0
Share