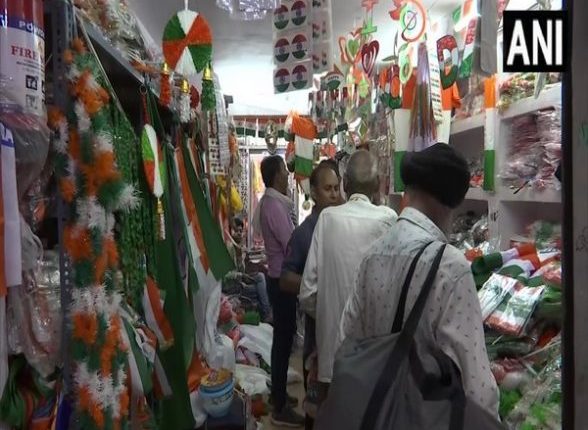 New Delhi, August 5: The demand for the Indian flag has surged in various parts of the country because of the Har Ghar Tiranga campaign to mark the 75th year of Independence. Around Independence Day, which is celebrated on August 15, the demand for the tricolour increases, but this year it’s flying higher.

“The demand for Tricolor has increased 10 times here, following which the ones who are in the profession of printing have left every other thing and have made themselves indulged in tiranga (tricolour) making,” a vendor in Delhi’s Sadar Bazaar told ANI. Har Ghar Tiranga Anthem Gives Tuneful Salute to Indian Tricolour Flag; Features Prominent Actors and Sports Figures Celebrating 75 Years of Independence (Watch Video).

Har Ghar Tiranga is a campaign under the aegis of Azadi Ka Amrit Mahotsav to encourage people to bring the Tiranga home and to hoist it to mark the 75th year of India’s independence.

Azadi Ka Amrit Mahotsav is an initiative of the Government of India to celebrate and commemorate 75 years of independence and the glorious history of India’s people, culture and achievements.

Prime Minister Narendra Modi on Sunday (July 31) called upon all citizens to turn the ‘Har Ghar Tiranga’ campaign into a mass movement by hoisting or displaying the national flag at their homes and using the ‘Tiranga’ as a display picture on their social media accounts between August 2 and August 15 to commemorate the 75th anniversary of India’s Independence.

A Kolkata-based shopkeeper also told ANI that the sale of Tricolour has doubled after the PM announced the ‘Har Ghar Tiranga’ campaign. “Demand for the national flag is so that we are having to manufacture it in cloth varieties other than Khadi cotton and silk to make it affordable for all,” he said.

In Gujarat’s Vadodra, Tricolour could be found even in sweets. Under the Azadi ka Amrit Mohatsav, the ‘Har Ghar Tiranga’ campaign being celebrated to commemorate 75 years of India’s independence, a sweets shop owner in Vadodara has made sweets in tricolour for this occasion.

Naval Bhumiya, the shopkeeper said, “To give a look to the sweet, vanilla essence has been used for saffron colour for white colour and pistachio essence for green colour.”

The shopkeepers said, “The market is filled with Tiranga items and people are coming in large numbers, mostly parents buying Tiranga items for their kids. This year’s ‘Har Ghar Tiranga’ campaign has been going on and the people in Jammu are preparing for it.”