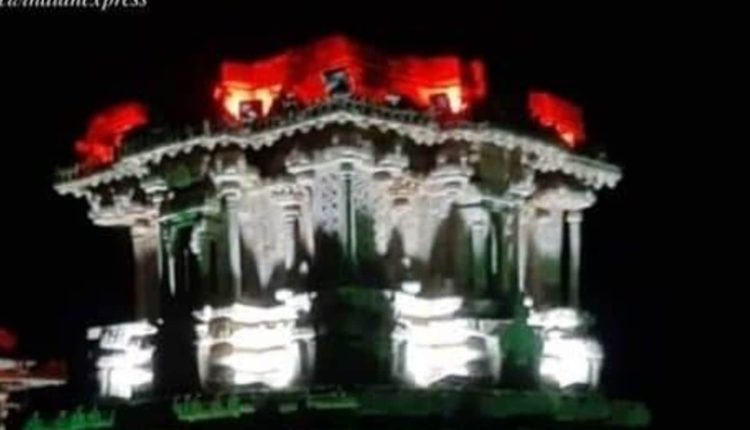 As part of the ‘Azadi Ka Amrit Mahotsav’ campaign and the country’s 75th Independence Day celebrations, the historical monuments at Hampi in Karnataka are decorated with tri-coloured lights. The stone chariot, Vittala temple, the gopuram of Virupaksha temple have also been lit in the colours of the national flag, turning into a magnificent spectacle.

Though the Hampi was flooded after heavy rains lashed the southern state, officials managed to finish the lighting works before the Independence Day celebrations next week.

After a long weekend, many people are expected to visit the historical town which was once the capital city of the Vijayanagara empire.

Union Minister for culture and tourism, G Kishan Reddy, shared a video of all monuments in Hampi and wrote: “Magnificent Hampi in Tiranga in Hampi, a world heritage site, in vibrant colors of the national flag commemorating #HarGharTiranga. Let’s all join the celebrations by hoisting the Tiranga at our homes from 13th to 15th August.(Sic)”

Prime Minister Narendra Modi has urged the people of the country to strengthen the Har Ghar Tiranga movement, also requesting citizens to change their display pictures on social media to tri-colour till August 15.

PM Modi has also changed his profile picture on all social media sites to tricolour.