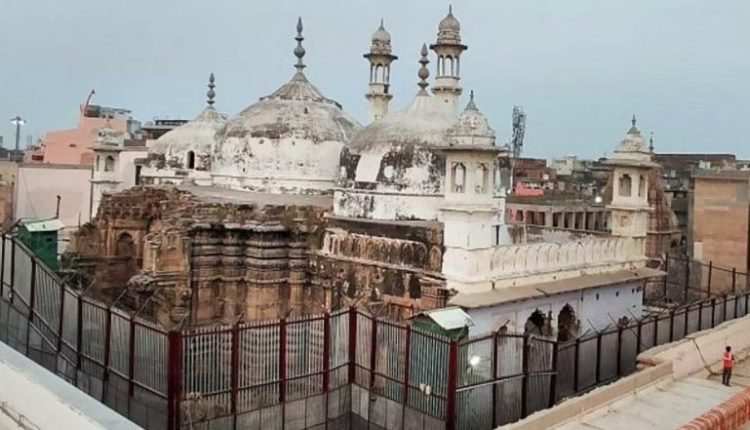 Varanasi, May 16: As the videography survey of the Gyanvapi Masjid complex was completed on Monday, the Hindu side advocates claimed that a ‘shivling’ had been found inside the well. Lawyer Vishnu Jain said he would go to the civil court to seek its protection. An advocate from the Hindu side, Madan Mohan Yadav, claimed that the shivling is Nandi faced.

“The shivling is 12 feet by 8 inches in diameter,” he added. Heavy security was deployed as the court-appointed committee reached the spot to conduct the survey on Monday. Nearly 65 per cent of the exercise was completed on Sunday. Gyanvapi Masjid Survey Over, ‘Shivling’ Found Inside Well, Says Lawyer; Watch Video.

The advocate commissioners will submit their report to the court on Tuesday. On Sunday, the survey of the areas of the mosque which, according to lawyers Hari Shankar Jain and Vishnu Jain, used to be a part of the temple was done.

On the western wall of the Gyanvapi complex, the remains of Hindu temple demolition are visible and the pictures which are the biggest proof, will be surveyed. For this, the fourth lock was opened on Monday, while the first three rooms were opened during the survey on Saturday.

Gyanvapi Mosque, adjacent to the Kashi Vishwanath Temple in Varanasi, is currently facing a legal battle. A court in Varanasi has directed the Archaeological Survey of India (ASI) to probe the structure of the Gyanvapi Masjid. The survey is to find out the truth behind the claims of the presence of Hindu symbols of worship in the mosque complex.

Five Delhi-based women — Rakhi Singh, Laxmi Devi, Sita Sahu and others moved the court with their plea on April 18, 2021, seeking permission for daily prayers before the idols of Hindu deities on its outer walls. They also sought to stop the opponents from causing any damage to the idols.

(The above story first appeared on Today News 24 on May 16, 2022 01:45 PM IST. For more news and updates on politics, world, sports, entertainment and lifestyle, log on to our website todaynews24.top).