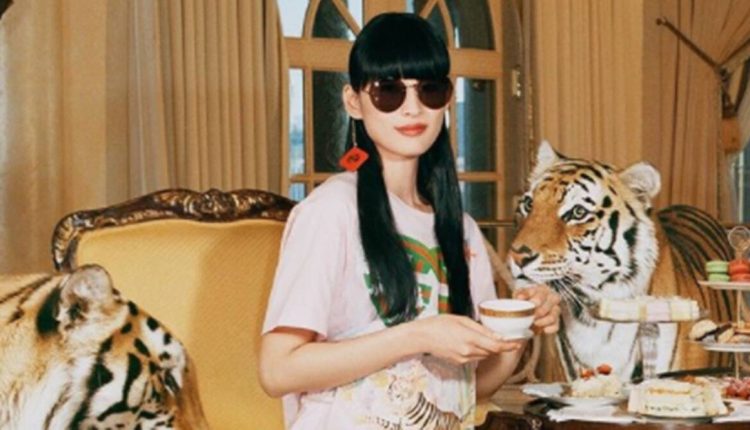 Luxury fashion brand Gucci has been facing criticism for its latest campaign for which it has featured real tigers. After seeing some pictures of the campaign — which celebrates the Chinese Year of the Tiger — social media users called out the company for its insensitivity.

The Italian designer’s collection is named ‘GucciTiger’; it was unveiled earlier this month, and it features “a wide-ranging selection of ready-to-wear and accessories, featuring various renditions of the animal”. The brand mentioned that it is a “mainstay” of Alessandro Michele’s “collections and a reflection of his fascination with nature”.

In the campaign photographs, we can see models wearing the collection made for both men and women, and posing with the big cats — lounging on a couch, sipping tea, etc.

The brand captioned one of the pictures, stating that “nature, wildlife and its denizens are particularly important to Gucci, which in February 2020, joined The Lion’s Share Fund, a unique initiative raising much-needed funds to protect endangered species and their natural habitats”.

It also mentioned that a “third-party animal welfare organisation, @americanhumane, monitored the set on which animals were present and verified that no animals were harmed”.

“Tigers were photographed and filmed in a separate safe environment complying to Gucci’s policies and then featured within the campaign,” the captioned mentioned.

In the comments section, however, people pointed out that using real tigers was a wrong call, because these endangered species can absolutely not be used as accessories. “It’s not okay to have wild animals in advertising,” one person commented.

“If you do not use fur, stop using wild animals in marketing. Collection is lovely but the real tiger is not (sic),” another wrote.

“Even if the images of this tiger were shot elsewhere, this is not okay,” someone else pointed out, while another social media user wrote, “It’s literally not hard to leave animals out of photos; ‘filmed in a safe environment’ means absolutely nothing when you literally use leather from animals.”

“More tigers live in captivity than the 3,900 remaining in the wild,” it wrote.