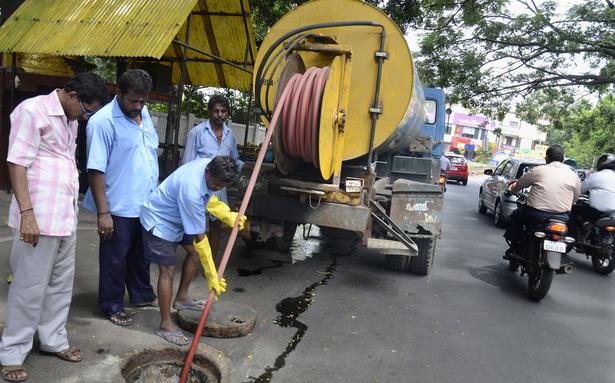 Since 2017, 351 people have died while cleaning septic tanks and sewers, shows data

Since 2017, 351 people have died while cleaning septic tanks and sewers, shows data

The Ministry of Social Justice and Empowerment (MoSJ&E) is now preparing to undertake a nationwide survey to enumerate all people engaged in hazardous cleaning of sewers and septic tanks, an activity that has led to at least 351 deaths since 2017. Drawing a distinction between this work and manual scavenging, the Ministry insisted that the practice of manual scavenging no longer takes place in the country as all manual scavengers had been accounted for and enrolled into the rehabilitation scheme.

Ministry officials said that the enumeration exercise, soon to be conducted across 500 AMRUT (Atal Mission for Rejuvenation and Urban Transformation) cities, is part of the Union government’s National Action Plan for Mechanised Sanitation Ecosystem (NAMASTE), which will streamline the process of rehabilitating sanitation workers and eventually merge with and replace the Self-Employment Scheme for the Rehabilitation of Manual Scavengers (SRMS), which was started in 2007.

The NAMASTE scheme is being undertaken jointly by the Ministry of Housing and Urban Affairs and the MoSJ&E and aims to eradicate unsafe sewer and septic tank cleaning practices, said Yogita Swaroop, Senior Economic Advisor in the MoSJ&E, who is overseeing the project.

Officials said that the Ministry’s Standing Finance Committee has already cleared ₹360 crore for this project — to be spent over the next four years.

Parts of this project, already in the works for the past two years, have led to municipal commissioners being declared as the Responsible Sanitation Authorities (RSAs) and Sanitation Response Units (SRUs) being set up in 200 cities, where the national helpline for addressing sanitation needs (14420) has also been operationalised.

Explaining that the enumeration of people engaged in hazardous cleaning of septic tanks and sewers would be the next step, a junior ministry official said that they will now set up Programme Monitoring Units (PMUs) for the 500 AMRUT cities, who will be at the frontlines of carrying out the exercise.

“We have targeted a total of 300 PMUs for this, after which the enumeration exercise is expected to take one year,” the official said, adding that once this exercise is completed across the 500 cities, it will be expanded nationwide, making it easier to bring government benefits like upskilling and loan and capital subsidies to them.

“Eventually, the idea is to also link these sanitation workers to the Swachhta Udyami Yojana, through which the workers will be able to own sanitation machines themselves and the government will ensure that at the municipality level, the work keeps coming in,” said a senior government official.

Other benefits under the scheme will include capital subsidies of up to ₹5 lakh on sanitation machinery costing up to ₹15 lakh and interest subsidies on loans, where interest rates will be capped between 4-6% for the beneficiaries, with the government taking care of the rest of the interest. In addition, the scheme also provides for training the workers in the use of these machines, during which time a stipend of up to ₹3,000 per month will be provided. The scheme will also provide for sanitation workers to train for and go into any of the approved list of alternative occupations in sectors like agriculture, services, electronics assembling, handicrafts and so on.

These provisions are similar to the ones that the SRMS already provides for, save for one component — a one-time cash transfer of ₹40,000.

Under the SRMS, the Social Justice Ministry had identified a total of 58,098 eligible manual scavengers in a nationwide survey conducted with help of State governments in 2018. Data from the Ministry showed that all of these beneficiaries had been given the one-time cash transfer of ₹40,000, 18,880 had opted for skills training in alternative occupations, and 2,051 had opted for loans under the scheme’s subsidies to start alternative businesses as of July 31 this year.

Officials added that since 2018, several attempts have been made to identify more manual scavengers, including through the Swachhta mobile app. However, the registrations on the app turned out to be fake, the Ministry claimed, adding that of the around 6,500 app registrations claiming benefits under the SRMS, none were found to be genuine.

“The focus now is to address hazardous cleaning of septic tanks and sewers through this scheme,” Ms. Swaroop said.