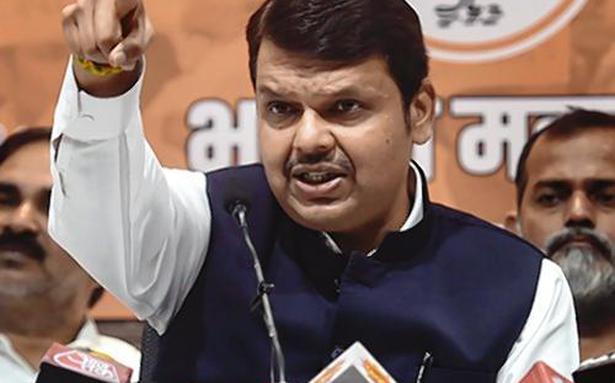 The program at the party office in south Mumbai was meant to celebrate its return to power in Maharashtra after two-and-half years following the collapse of the Uddhav Thackeray-led MVA government.

Mr. Fadnavis, who had on Thursday announced that he would not be part of the new Eknath Shinde-led government but later took oath as Deputy Chief Minister, did not attend the celebration.

A close aide of the former Chief Minister said he was busy holding meetings at his residence ahead of the two-day special session of the Maharashtra legislature from July 3.

Asked if Mr. Fadnavis would attend the national executive of the party that began in Hyderabad from Friday, a BJP functionary said, “He has spoken with our national leaders and informed them about the situation here. He would not attend the Hyderabad meeting as dates overlap with the legislature session.” Mr. Fadnavis would address a meeting of BJP legislators at a hotel here on Friday evening, sources said.

It was widely expected that Mr. Fadnavis, considered to be instrumental in engineering a split in the Shiv Sena which led to the collapse of the Sena-NCP-Congress government, would again become Chief Minister.

But on Friday evening, he announced at a press conference after meeting the Governor that Mr. Shinde, the rebel Sena leader, would be the next Chief Minister, while he himself would not be part of the government. The BJP is the single largest party in the Assembly.

Even as the State reeled under the stunning news, BJP president J. P. Nadda said that Mr. Fadnavis had been asked to accept the post of deputy Chief Minister

Speaking to reporters in Pune late in the evening, NCP chief Sharad Pawar took a jibe at Mr. Fadnavis, saying he did not seem too happy taking the junior post but was probably following orders from above.

Notably, Mr. Shinde was a Minister when Fadnavis headed the BJP-Sena government in the State from 2014 to 2019.