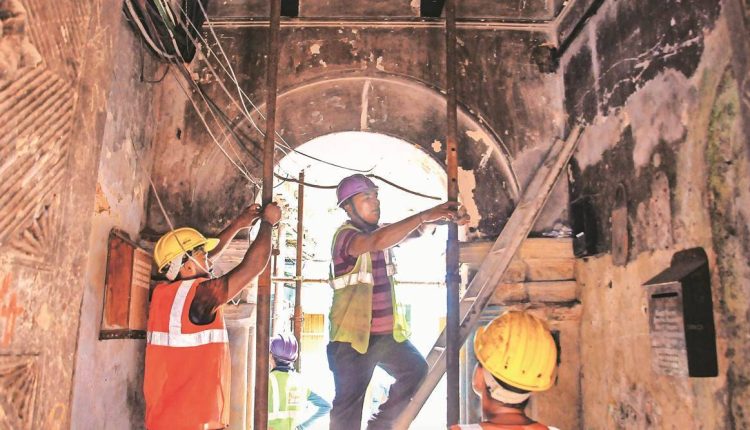 The Kolkata Metro Rail Corporation Limited (KMRCL) on Monday started demolishing a portion of one of the houses in Bowbazar’s Durga Pituri lane after they developed cracks following the tunneling work in the East-West Metro Corridor.

The KMRCL has decided to demolish only a portion of two houses – 16 and 16/1 Durga Pituri Lane – after they developed cracks. A total of 14 houses in the area have developed cracks and fissures. The decision on the status of remaining houses will be taken in consultation with the opinion of an expert group of Kolkata Municipality, sources said.

A team of experts from Jadavpur University on Monday visited the area and tested the soil condition to ascertain the structural viability of the houses in the area as well the safety of the Metro construction work.

According to the sources, another house – 15, Durga Pituri Lane — has been declared dilapidated, and following KMC’s approval, it too will be demolished.

Meanwhile, the demolition of a portion of the second house – 16/1 Durga Pituri Lane — could not head forward as the authorities did not receive the building owner’s consent.

“I am now at the mercy of God. They asked me to take out my stuff. I wish I wasn’t alive to see all this. If they ask me to sit here I will do it. What option do I have other than this,” said teary-eyed Rajlakshmi Sen, a resident of 16, Durga Pituri Lane.

Local MLA Nayna Bandopadhyay and councilor blamed the Metro authorities for creating “uncertainty” over the demolition of the house.

Last Thursday, water leakage from inside the shaft, built for retrieval of the two tunnel boring machines (TBMs) commissioned to dig the twin East-West Metro tunnels, had caused cracks in the buildings. Several residents were evacuated and sent to hotels for safe stay.